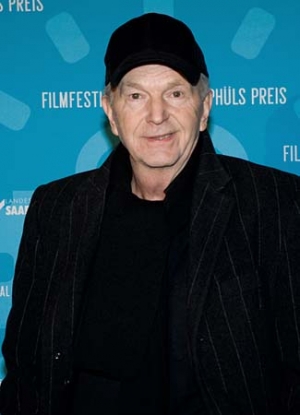 Michael Gwisdek was born in Berlin-Weißensee on January 14, 1942. While supporting himself as a decorator, painter and kitchen helper, he started performing in the worker's theater of Friedrichshain and studied acting at the Theaterinstitut Leipzig.

From 1965 until 1968, he attended the Staatliche Schauspielschule Berlin, and subsequently became a company player at the Städtisches Theater Karl-Marx-Stadt. He stayed for six years, during which he was cast in a great range of roles in classic and modern plays. Due to his memorable performance as Pantalone in Goldoni's "Servant of Two Masters", Benno Besson hired him for the Volksbühne Berlin in 1973. There he excelled in a row of productions of plays by William Shakespeare, and also starred in the premiere production of Heiner Müller's "Der Bau" (1980) as well as Müller's adaptation of "Macbeth" (1982). In 1983, he joined the ensemble of the Deutsches Theater Berlin, where he remained a company player until 1991.

Michael Gwisdek made his screen debut in the 1968 western "Spur des Falken" ("Trail of the Falcon"). He only appeared sporadically in feature films during the following years, yet he became a fixture on East German television. In 1975, he got his first major screen role in Kurt Maetzig's "Mann gegen Mann". His final breakthrough as a movie actor came in the early 1980s with leading roles in "Dein unbekannter Bruder" and "Olle Henry". He went on to display his comic talent in "Merkwürdiges Beispiel einer weiblichen Rache" (TV, 1987) and had a memorable turn as a gay barkeeper in Heiner Carow's "Coming out" (1989).

He made his directorial debut with the 1988 drama "Treffen in Travers", which was well received by critics and is today considered to be one of the best feature films of the late DEFA phase. It won several festival prizes and also screened in the section "Un certain regard" at the Cannes IFF.

Throughout the 1990s, Gwisdek remained a prolific actor in TV and film. After writing, directing and starring in "Abschied von Agnes" (1994), he made his third feature film "Das Mambospiel" ("The Big Mambo", 1998), in which he starred opposite his wife Corinna Harfouch (to whom he was married from 1985 until 2007).

His turn in Andreas Dresen's acclaimed tragicomedy "Nachtgestalten" ("Night Shapes", 1999) won Gwisdek the Silver Bear at the 1999 Berlin IFF. While Gwisdek went on to play a publisher in Oskar Roehler's "Die Unberührbare" ("No Place To Go", 2000) and a monk in Zoltan Spirandelli's "Vaya con dios" (2002), he predominately worked in TV. Nevertheless, he had memorable cameos in films like "Good Bye, Lenin!" (2003), "Herr Lehmann" ("Berlin Blues", 2003) and "Elementarteilchen" ("The Elementary Particles", 2006), and played supporting roles in "Kleinruppin Forever" (2004), "Reine Formsache" ("A Mere Formality", 2006) and "Boxhagener Platz" ("Berlin, Boxhagener Platz ", 2010). In 2010, he starred opposite Christian Ulmen in the tragicomedy "Vater Morgana", and played the father to Jessica Schwarz's character in "Das Lied in mir" ("The Day I Was Not Born").

Following parts in "Die Abenteuer des Huck Finn" ("The Adventures of Huck Finn", 2012) and "Anleitung zum Unglücklichsein" ("The Situation is Hopeless, But Not Serious", 2012) as well as a cameo as God himself in the comedy "Jesus liebt mich" ("Jesus Loves Me", 2012), Gwisdek appeared as a wise drunk in Jan Ole Gerster's 2013 feature "Oh Boy" ("A Coffee in Berlin"). His remarkable turn in the film won Michael Gwisdek the German Film Award for Best Supporting Actor.

Gwisdek maintained a busy schedule with very diverse roles in films like "Hai-Alarm am Müggelsee" ("Shark Alarm at Müggel Lake", 2013), "Vaterfreuden" ("Joy of Fatherhood", 2014) and "Miss Sixty" (2014). After playing a secret service official in the political satire "Heil" (2015), he starred as a reactivated East German spy in the comedy "Kundschafter des Friedens" (2016).

Gwisdek played his last cinema roles in Lars Kraume's drama "Das schweigende Klassenzimmer" ("The Silent Revolution", 2018) and in Martin Schreier's DEFA romance "Traumfabrik" ("Dream Factory", 2019). In 2019 he appeared on television in comedies such as "Familie Wöhler auf Mallorca" and "Die Lehmanns und ihre Töchter" and in series such as "Das Traumschiff" and "Eichwald, MdB".

Michael Gwisdek died after a short illness on 22 September 2020 at the age of 78.