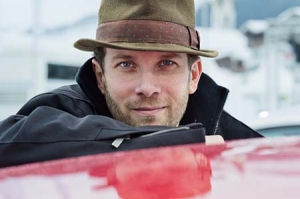 Christian Ulmen was born in Neuwied/Rhein on September 22nd, 1975, but grew up in Hamburg where he created features for Radio Hamburg and OK-Radio from a teenage age on. In 1994, Ulmen became a presenter for "Disney & Co.", a children's TV Show for RTL. Then, in 1996, he started to present different programmes for the music channel MTV and later on starred in his own productions like "Unter Ulmen" and "Ulmens Auftrag". In January 2005, Pro 7 aired Ulmen's reality TV show "Mein neuer Freund".

In 2003, Ulmen debuted on the big screen in Benjamin Quabeck's "Verschwende deine Jugend" (Play It Loud!). He then played the leading part in Leander Haußmann's adaptation of the Berlin novel "Herr Lehmann" (Berlin Blues) and received the Bavarian Movie Award for Best Leading Actor. In 2005, Ulmen, together with Alexandra Maria Lara, starred in Doris Dörrie's romantic comedy "Der Fischer und seine Frau" (The Fisherman and His Wife).

For his portrayal of a police psychiatrist in the comedy series "Dr. Psycho", he received a Bayerischer Filmpreis and a Grimme Award. In 2009, Ulmen starred in "Maria, ihm schmeckt's nicht", an adaptation of Jan Weiler's eponymous novel, and the comedy "Männerherzen". In 2010, he played alongside Christian Tramitz in "Jerry Cotton", took the lead in Lars Jessen's culture clash comedy "Hochzeitspolka" and starred in Harald Sicheritz' satire "3faltig" and Till Endemann's comedy "Vater Morgana".

The following year, for "Männerherzen… und die ganz ganz große Liebe", a sequel to the 2010 box office hit, Ulmen slipped into the role of shy trade supervision clerk Günther once more. Still in 2011, he appeared in every episode of the talk show "Stuckrad Late Night" (ZDFneo) as nerve-wrecking Uwe Wöllner, a character taken from his controversial TV program "Mein neuer Freund"; Ulmen himself was also the show's producer and director.

Early in 2012, he starred in the reality comedy "Jonas" as a notorious grade repeater who gets his last chance to graduate from an East German comprehensive school while being accompanied by a camera crew.

In "Einer wie Bruno" (2012), Ulmen starred in a more serious role as a single father with an intellectual disability who has to take care of his 13-year-old daughter. The same year, in Marcus H. Rosenmüller's "Heimat" comedy "Wer's glaubt, wird selig" ("Don't You Believe It!"), he played a shrewd barkeeper who wants to boost tourist revenues in his Bavarian hometown by employing a dubious trick.

In 2013, Ulmen focussed on TV again: On Valentine's Day, the first episode of "Who wants to fuck my girlfriend?" aired. In this satirical reality game show consisting of 12 episodes, two men make a bet on whose girlfriend is more desirable to other men, with Ulmen returning in the role of Uwe Wöllner. Since the end of 2013, Ulmen and Nora Tschirner have teamed-up as the new detective duo for the Weimar "Tatort" that features ironic stylisation as their trademark.

In December 2014, Ulmen belonged to the prominent cast of "Alles ist Liebe", an ensemble comedy in which he played a gay man whose relationship goes through a crisis right before the wedding. In the children's film "Gespensterjäger" ("Ghosthunters – On Icy Trails", 2015) he then featured as the young hero's good-natured yet ignorant father. In addition, director Frieder Wittich cast Ulmen for the role of a music teacher who tries to get a highly gifted student ahead with a career in the music business in "Becks Letzter Sommer" ("Beck's Last Summer", 2015).