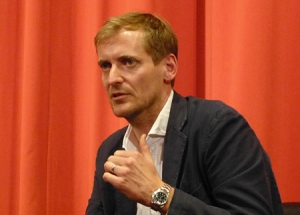 Lars Kraume was born in Chieri, Italy on February 24 1973. He grew up in Frankfurt, and after graduating from school, he started working for ad agencies and later became a freelance photographer. In 1992, he directed his first short "3:21", and from 1994 till 1998, he studied at the Deutsche Film- und Fernsehakademie (dffb) in Berlin. During that time, he worked as assistant director on Matthias Glasner's thriller "Sexy Sadie". Kraume's student short "Life is too short to dance with ugly women" (1996) won the award for Best Short Film at the Turin International Film Festival.

His graduation film "Dunckel" told the story of three brothers (Florian Lukas, Oliver Korittke and Sebastian Blomberg) on the run from the police after a robbery, and earned him the renowned Grimme Award for Best Director. Following the TV thriller "Der Mörder meiner Mutter" (1999), Kraume directed the satire "Viktor Vogel - Commercial Man", which is set in the world of advertisement.

He continued to work in television, and in 2005, he experienced his final breakthrough as a director thanks to three highly different projects: The documentary "Kismet – Würfel Dein Leben" follows two young men who roll a dice to decide where to go next on their trip through Europe, the rock'n'roll road movie "Keine Lieder über Liebe" starring Florian Lukas, Jürgen Vogel and Heike Makatsch, and "Wo ist Max Gravert?", an acclaimed episode of the TV series "Polizeiruf 110".

His made-for-TV drama "Guten Morgen, Herr Grothe" premiered at the 2007 Berlin IFF and went on to win several awards. The same year, he co-founded the production company Badlands Film together with Matthias Glasner and Jürgen Vogel. Continuing his high-profile work in television, Kraume presented his next, highly anticipated cinema release in 2010: "Die kommenden Tage" is set in a near future of social and political turmoil and tells the story of two sisters who have to make life-changing decisions.

While this film got mixed reviews, Kraume's following "Tatort" entries where unanimously lauded by critics and audiences alike: "Eine bessere Welt" (2011) garnered Justus von Dohnányi a nomination for the 2011 German Television Award; "Der Tote im Nachtzug" (2011) was nominated for the 2012 Grimme Award; "Es ist böse" was singled out as a masterpiece by the FAZ.

After "Im Namen des Vaters", the second to last "Tatort" starring Nina Kunzendorf and Joachim Król as police detectives, Kraume returned to the cinema with the family drama "Meine Schwestern", which premiered in the Panorama section of the 2013 Berlin IFF.

The 2015 Locarno IFF saw the premiere of Kraume's "Der Staat gegen Fritz Bauer" ("The People vs. Fritz Bauer"), a dramatic account of general attorney Fritz Bauer's prosecution of Nazi crimes in the 1950s West-Germany. The film went on to win the festival's audience award UBS and was released in October 2015. Just a few week later, Kraume's drama "Familienfest" opened in German theatres.

"Der Staat gegen Fritz Bauer" went on to win numerous other awards, culminating in five German Film Awards, including Best Feature, Best Screenplay and Best Director. Kraume next made headlines with his interactive, made-for-TV feature film "Terror – Ihr Urteil" ("The Verdict", 2016), in which a fighter pilot is put on trial after shooting down a hijacked airliner. Via telephone, TV viewers could decide whether the pilot should be sentenced or acquitted (the majority voted for "not guilty").

In early 2017, Kraume began production on "Das schweigende Klassenzimmer" ("The Silent Revolution"), which relates the true story of students in 1956 East-Germany who are harassed by the secret police Stasi after a spontaneous minute's silence for the victims of the uprising in Hungary. The film was released in Germany just a week after its world premiere at the 2018 Berlin IFF.

At the 2018 Munich Film Festival, Kraume was awarded the 'Director's Prize National' at the Peace Prize of German Film for "Das schweigende Klassenzimmer".

For television, he made the multi-parter "Die neue Zeit" ("Bauhaus – A New Era", 2019), about the relationship between Walter Gropius and Dörte Helm and the emergence of the Bauhaus. The TV film "Gott - Von Ferdinand von Schirach" ("Playing God", 2020), in which viewers were asked to vote on the subject of euthanasia, caused a wide debate. After "Terror - Ihr Urteil" ("The Verdict"), this was Kraume's second 'interactive' film.

In the summer of 2021, Kraume began shooting his next feature film: "Ein Platz an der Sonne" ("A Place in the Sun") is about a young Berlin ethnologist (Leonard Scheicher) who becomes a witness to the genocide of the Herero and Nama in the colony of "German Southwest Africa" at the beginning of the 20th century.