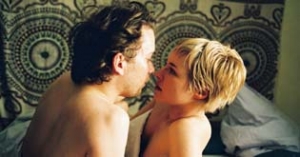 It′s West Berlin in 1989, shortly before the fall of the Berlin Wall. The Kreuzberg district is known for its beer-drinking freaks and self-styled artists; it′s a magnet for every social misfit that refuses or is simply unable to cope with the real world.

Prominent in the group is Frank, with playful respect called Mr. Lehmann. When he′s not tending bar himself, Frank is getting smashed at another bar where his best friend Karl works. It’s there that he meets Katrin, who quickly becomes the focus of his love, sex and marriage fantasies. To help his buddy, Karl arranges a romantic evening... for three... which doesn’t go over too well. It’s only when Karl leaves the picture that the rest of the night greatly improves for Frank and Katrin... with Frank left believing that his fantasy of love and kids is well underway. When he arrives too late for their next date, however, Katrin meets and falls in love with another man and Frank′s fantasy of their life together explodes.

With his small world crumbling around him, Frank turns 30. On this day the Berlin Wall also crumbles, and as he joins the influx of ecstatic humanity pouring through a lifted concrete barrier, he is inspired. Not only his world but also the entire world has suddenly been changed. It is an end of an era for both...