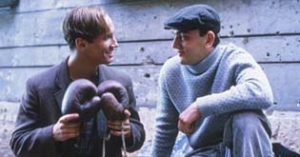 The film recounts the story of the boxer Gustav (Bubi) Scholz who began his career at the end of the 40′s, advanced to European champion in the 50′s and became one of the great sports idols of this time. After winning 88 fights (he had only lost on two occasions), he retired in the mid-1960′s and began a middle-class existence. Twenty years later in 1984, he returned to the centre of public attention after he had shot his wife dead apparently during an argument.