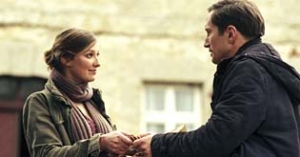 A job brings the photographer Marc and his son Tyll to the remote and mysterious village of Kaifeck in Bavaria. Marc is strangely fascinated by a tale of gruesome murders on a nearby farm in 1922, and, suddenly, inexplicable things start happening to him at night. He feels a weird connection to the events from back then and is drawn ever deeper into the dark past. So deep that it is not only his own life that is in danger, but also that of his son.

One of Germany′s most intriguing unsolved murder mysteries has provided inspiration for this atmospheric mystery thriller, starring Benno Fürmann ("Merry Christmas") and Alexandra Maria Lara ("Control, Youth Without Youth") in the lead roles. Director Esther Gronenborn ("alaska.de") weaves an absorbing tale of guilt and superstition based on the real case, where six people found a grim death in a village called Kaifeck in the forests near Munich in 1922.