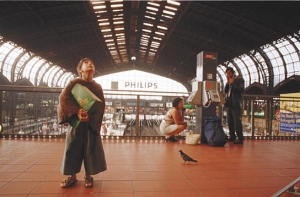 A Handful of Grass

Ten-year-old Kendal lives in very simple circumstances in a small Kurdish village until one day his uncle arrives. The uncle brings him to Germany. He works for Salim, a drug boss who has a special fondness for using children as dealers. They have barely arrived in Hamburg when his uncle is arrested.

Hellkamp, the taxi driver, a loner who used to be with the police, picks up Kendal and reluctantly decides to look after him. But since he is not allowed to keep Kendal, the boy ends up in a children′s home.
His uncle tracks him down to the home, and from then on, Kendal works as a drug dealer for Salim. He quickly turns into a tough young street child. In the children′s home Kendal is pestered and hassled by the older boys. Finally, his troubles force him to flee to the one person he can trust, the taxi driver Hellkamp. Gradually, a deep friendship now develops between the unresponsive Hellkamp and the lonely boy. In the end, Hellkamp decides to remove Kendal from his criminal milieu and to take up the fight against the drug boss Salim and his men.