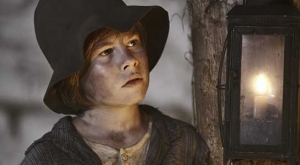 The Adventures of Huck Finn

Sequel to the 2011 children's film "Tom Sawyer": Since Tom and Huck discovered a huge treasure at the end of their previous adventure, the two friends have been living in luxury. Although they are rich now, they are not the kind of boys who like sitting pretty at home. Thus they use every opportunity to sneak out of aunt Polly's house in order to enjoy their freedom. But one day, Huck's father, a drunkard and never-do-well who abandoned his family, arrives in town. He has heard of his son's fortune and tries to get hold of Huck's portion of the treasure. Meanwhile, Jim, an African-American slave and friend of Huck, learns that he has been sold by Miss Watson. Together Huck and Jim run away and set out for Ohio, where slavery has been abolished. A dangerous journey, since they have three ruthless slave traders and Huck's greedy father close on their trail.