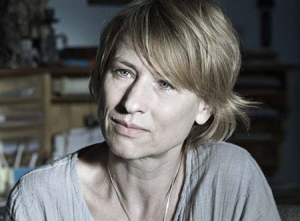 Born with the name of Corinna Meffert on the 16th of October, 1954, Corinna Harfouch grew up in Großenhain (Saxony). After finishing high school, she did an apprenticeship as a nurse and started her studies in textile engineering at the technical university in Dresden in 1975. From 1978 to 1981 she was enrolled at the Berlin drama school. Taking on various theatrical engagements – among them at the Berliner Ensemble and the Deutschen Theater – in the years that followed she played a number of roles in various cinema and television productions.

Already in 1985, she caught the eye of the cinema-going public with her performance in Roland Gräf's Friedrich Wolf film adaptation "Das Haus am Fluß". She received several awards for her performances in two main roles in 1988. In Siegfried Kühn's film "Die Schauspielerin", she played Maria Rheine, who renounces a promising acting career under the Nazis, becoming Jewish instead in order to stay together with her lover. In Michael Gwisdek's first film as director, "Treffen in Travers", she played the wife of the revolutionary Georg Forster. For this highly intensive role, Harfouch received an award for her performance at the very last film festival to take place in the GDR.

After the fall of the Berlin Wall, she took on various roles, including the twin mother in "Charlie & Louise – Das doppelte Lottchen" (1994), a GDR fugitive citizen in "Das Versprechen" ("The Promise", 1994), a prison doctor in the black comedy "Sexy Sadie" (1996), a beautiful murder suspect in "Solo für Klarinette" ("Solo for Clarinet", 1998) and a psycho-therapist in Bernd Eichinger's film "Der große Bagarozy" ("The Great Bagarozy", 1999).

Corinna Harfouch achieved particular success with her role both in the children's film "Bibi Blocksberg" (2002) as well as its sequel "Bibi Blocksberg und das Geheimnis der blauen Eulen" ("Bibi Blocksberg and the Secret of the Blue Owls", 2004), where she played a witch. For the first of the two she received a German Film Award for best actress in a supporting role. She also attracted widespread attention for her performance in Oliver Hirschbiegel's film "Der Untergang" ("Downfall", 2004), where she played the role of Magda Goebbels. For this performance she was again nominated for the German Film Award.

In the following years Harfouch played in such ambitious films like the adaptation of Houellebecqs novel "Elementarteilchen" ("Elementary Particles", 2006) by Oskar Roehler, in Tom Tykwer's adaptation of Patrick Süsskind's "Das Parfum" ("Perfume", 2006) and also in smaller productions like Franziska Meletzky's "Frei nach Plan" ("According to the Plan", 2007). In 2008 she starred in the new film by Caroline Link, "Im Winter ein Jahr" ("A Year Ago in Winter").

Later she could be seen in a number of ambitious television plays, for example in Mark Schlichter's drama "Tod einer Schülerin" (2010) or Jan Ruzicka's crime comedy "Schmidt & Schwarz" (2011). At the end of 2011 "Auf der Suche" ("Looking for Simon"; D: Jan Krüger) hit the cinema screens, a by and large independently produced drama about a mother who is looking for her missing, gay son in Marseille.

In 2011, she displayed her comic talent as the youthful mother of a struggling heartbreaker in Thorsten Wacker's screen adaptation of the novel "Kein Sex ist auch keine Lösung". She then shone in the role of a depressive housewife in Hans-Christian Schmid's domestic drama "Was bleibt" ("Home for the Weekend"), which premiered at the 2012 Berlin IFF. In the comedy, "3 Zimmer/Küche/Bad" ("Move"), Harfouch played the mother of three grown-ups who try to make living in Berlin. In Sebastian Kutzli's drama "Puppe" (2012), she starred in the demanding role of a therapist who tries to gain the trust of a tough and reclusive street kid.

In 2013, playing an educated middle-class, emotionally stunted mother, she belonged to the large ensemble of the scathing satire "Finsterworld". Urs Egger's "Der Fall Bruckner" (2014, TV), about a youth welfare officer (Harfouch) who looks into a difficult case of child abuse, also received much critical praise. For her performance Harfouch won the Günter Rohrbach Filmpreis and the Deutscher Schauspielerpreis (German Actor Prize); she was also awarded the Grimme Preis together with Urs Egger and the authors Hans Ullrich Krause and Cooky Ziesche. She played other TV roles, among them a wife persecuted by a killer in Hagen Bogdanski's black comedy "Die vermisste Frau" (2016) and the helicopter mother of an 18-year-old son in the drama "Viel zu nah" (2017). The latter part earned her the Hessian Television Prize.

Harfouch had a short, but humorous and striking appearance on the big screen as a nihilistic vocational information centre employee in the box office hit "Fack ju Göhte 3" ("Suck Me Shakespeer 3", 2017). She played leading roles as a frustrated wife in the tragicomic road movie "Wer hat eigentlich die Liebe erfunden?" ("Cloud Whispers", DE/CH 2018) and again as the overprotective mother of an adult son in Jan-Ole Gerster's "Lara" (2019). For this achievement Harfouch received the German Film Critics' Prize and the Actors' Prize at the Karlovy Vary International Film Festival.

In the series "Deutschland 89" (2020), she played a GDR agent, and in the award-winning TV tragicomedy "Ruhe! Hier stirbt Lothar" (2021), she played a breast cancer patient who befriends a man in a hospice who is also terminally ill with cancer.

In 2021 "Das Mädchen mit den goldenen Händen" ("The Girl With the Golden Hands"), an East German social study and mother-daughter drama starring Harfouch and Birte Schnöink, premiered at the Munich Film Festival. The film was then theatrically released in February 2022.

Corinna Harfouch has two sons from her second marriage with the actor and director Michael Gwisdek: Robert, who is also an actor, and Johannes. After her separation from Gwisdek she was in a relationship with producer Bernd Eichinger.