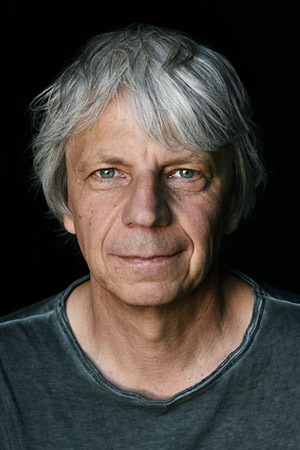 Andreas Dresen was born August 16, 1968, in Gera. He grew up in Schwerin and started shooting his own amateur movies since the late '70s. After receiving his university-entrance diploma, he worked as a sound engineer at the theater in Schwerin and completed a traineeship at the DEFA Studio for Feature Films where he also worked as an assistant director to his later mentor Günther Reisch. From 1986 until 1991 Dresen studied directing at the "Konrad Wolf" Academy of Film and Television in Potsdam-Babelsberg. Since 1992, he has been working as a freelance author and director.

Andreas Dresen's features for TV and cinema have won him several awards. His debut movie "Stilles Land" ("Silent Country", 1992) earned him both the Hessen Film and Cinema Prize and the German Critics' Award. His breakthrough came with the episodic film "Nachtgestalten" ("Night Shapes"), which ran at the Berlinale in 1999. The movie won several awards, including the German Film Award in Silver and the German Critics' Award.

Two years later, "Halbe Treppe" ("Grill Point") turned out to be a great success, winning him the Silver Bear at the Berlinale, the German Film Award in Silver and directing awards at the festivals in Ghent and Chicago. In 2005, the movie version of Christoph Hein's novel "Willenbrock" was awarded the "Internationaler Literaturfilmpreis" as Best International Literature Adaption.

Dresen celebrated his greatest popular success so far when "Sommer vorm Balkon" ("Summer in Berlin") was released in 2006. Amongst other awards, the movie received an Ernst Lubitsch Award and the Bavarian Film Prize for Best Director. Dresen also shoots documentary films ("Herr Wichmann von der CDU"/"Vote For Henryk!", 2003) and continues to work at theatres such as the Schauspiel in Leipzig and the German Theater in Berlin ("Kasimir und Karoline" by Ödön von Horváth, 2006). In February 2006, he made his successful debut as an opera director at the Theater Basel with Mozart's "Don Giovanni".

His next film project after "Sommer vorm Balkon", the drama "Wolke 9" ("Cloud Nine", 2008) about the late love affair of a 69 year old married woman and the dramatic consequences also won several prices, among them the German Film Award in three categories. With "Whisky mit Wodka" ("Whisky with Wodka") which opened in autumn 2009, Dresen presented a comical portrait of the film business. Henry Hübchen stars in the lead role as an aging film star.

At the Cannes film festival 2011 Dresen showcased his drama "Halt auf freier Strecke" ("Stopped on Track") in the section "Un Certain Regard". The film that explores how a family's life is changed when the father is diagnosed with an inoperable brain tumor, received rave reviews from the audience and critics alike and was awarded the section's top prize. More prizes and a huge box office success followed. "Halt auf freier Strecke" was nominated seven times in the German Film Awards competition in 2012 and won in the category "Best Director".

The same year, "Herr Wichmann aus der dritten Reihe" ("Henryk from the Back Row"), a sequel to "Herr Wichmann von der CDU" from 2003, premiered in the Panorama section of the Berlin IFF. Like the prequel, this documentation that was theatrically released in the summer of 2012, also received very favorable reviews. In 2013, Dresen contributed the episode "Brandenburg" to the TV documentary series "16 x Deutschland - Menschen - Orte – Geschichten".

In 2015, thirteen years after "Halbe Treppe" made its impact at the festival, Andreas Dresen was again invited into the competition of the Berlin IFF with his feature "Als wir träumten" ("As We Were Dreaming"): The film relates the story of five young friends in Leipzig, who experience the rush of the reunification of Germany and hope to fulfill their dreams of the future.

Dresen then made the first children's and youth film of his career: "Timm Thaler oder das verkaufte Lachen" ("The Legend of Timm Thaler or The Boy Who Sold His Laughter", 2017), based on the 1962 novel by James Krüss and the 1979 TV series "Timm Thaler". At the German Film Awards, Dresen's adaptation was nominated in the "Best Children's Film" category, among others.

With his next film, Dresen once again turned his attention to a chapter of German history: the film biography "Gundermann" (released in August 2018) told the life story of the feisty worker and singer-songwriter Gerhard Gundermann, who died in 1998 at the age of just 43. The film was a success at the box office and with critics and won six Lolas at the 2019 German Film Awards, including the Golden Lola for Best Film and the Lola for Best Director.