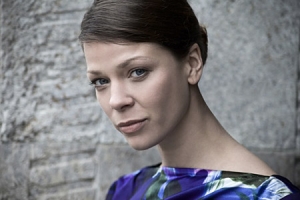 Jessica Schwarz was born May 5, 1977, in Erbach in the Odenwald and grew up in Michelstadt. In 1993, "Bravo" readers voted her to be the "Bravo" girl. She then worked as a model and did on-set clips for the show "film ab" on the TV music channel VIVA. That was when she met director Benjamin Quabeck who gave her the part of the leading actress in his debut feature film "Nichts bereuen" ("No Regrets"). This love story saw Schwarz alongside Daniel Brühl who then also became her partner in real life. In the following years, Schwarz starred in Quabeck's "Verschwende deine Jugend" ("Play it Loud!", 2003), and two films by Dominik Graf: "Die Freunde der Freunde" (2002; which won a Grimme prize) and "Der rote Kakadu" ("The Red Cockatoo", 2005). The part of "November" in Hendrik Hölzemann's "Kammerflimmern" ("Off Beat", 2004) won her the 2004 Bavarian film prize as "best actress".

Schwarz was also praised for her performance as the epitome of a seductress who herself is yearning for love in the title role of Uwe Janson's adaptation of Wedekind's "Lulu" (2006). In Torsten C. Fischer's "Der Liebeswunsch" ("Impossibly Yours"), Schwarz plays a woman who loses herself in her longing for love.

In 2006, Schwarz was also seen in Tom Tykwer's adaptation of Patrick Süskind's best-selling novel "Das Parfum – Die Geschichte eines Mörders" ("Perfume – The Story of a Murderer") alongside several well-known actors including Dustin Hoffman. In the same year, Schwarz starred in the children's film "Die Wilden Hühner" ("Wild Chicks") and was also seen in the film's two sequels that opened in cinemas in 2007 and in 2009, respectively.

In 2008, Schwarz played the role of Antonie Buddenbrook in Heinrich Breloer's elaborate film version of Thomas Mann's classic novel "Buddenbrooks" ("Buddenbrooks – The Decline of a Family"). In the following year, she was seen in Torsten C. Fischer's ARD biopic "Romy" in the title role of legendary actress Romy Schneider. In 2009, she also played the role of the wife of a depressive painter (Mads Mikkelsen) in Anno Saul's thriller "Die Tür" ("The Door").

Critical praise was bestowed upon her for her performance in Florian Cossen's Award-winning drama "Das Lied in mir" ("The Day I Was Not Born", 2010): She plays a young woman who is led to the secret of her family background by a childrens' song. Also impressive was her turn as a no-frills physician in the 2011 release "Der Mann, der über Autos sprang" ("The Man Who Jumped Cars"), co-starring Robert Stadlober and Anna Schudt. Next came the childrens' film "Als der Weihnachtsmann vom Himmel fiel" ("When Santa Fell to Earth"), in which Schwarz plays a stressed-out mother.

She had an important supporting role in the youth drama "Am Ende eines viel zu kurzen Tages" ("Death of a Superhero", DE/IR 2011) as a young woman who gives a terminally ill fifteen-year-old an important lesson for life. In the melancholic tragicomedy "Heiter bis wolkig" ("Partly Sunny", 2012) Schwarz herself played a woman who is incurably ill with cancer and develops a special friendship with her sister's new boyfriend. Alongside Florian David Fitz, who also directed the film, Schwarz had a leading role in the tabloid comedy "Jesus loves me" (2012), about a woman who falls in love with the Son of God shortly after her marriage plans fail.

For the television two-parter "Baron Münchhausen" ("Baron on the Cannonball", 2012) Schwarz took on the role of an impoverished aristocrat who gets involved with the lying baron in all kinds of exciting adventures.

In the ensemble film "Adieu Paris" (DE/LU/FR 2013), Franziska Buch cast Schwarz as the star author who surprisingly meets the wife of her lover lying in a coma. The film adaptation of Martin Suter's "Der Koch" (DE/CH 2014) shows Schwarz as the cook, who opens an enormously successful catering service for "love menus" together with a Tamil asylum seeker and Ayurvedic cook.

More serious was the crime drama "Zum Sterben zu früh" (2015, TV) by Lars Becker, in which Schwarz played the wife of a Hamburg investigator, whose marriage is in danger of falling apart due to the serious illness of their daughter. In the relationship drama "Zweimal zweites Leben" ("Twice New Life", 2016, TV), Schwarz was as wife, who takes care of her husband who is in a coma and while doing so meets another man whose wife is also in a coma.

On the big screen Jessica Schwarz could be seen in the comedy "Stadtlandliebe" in summer 2016 as a successful but stressed-out Berlin doctor to the countryside who moves with her husband. In the highly acclaimed drama "Die Hände meiner Mutter" ("Hands of a Mother") she stars as the wife of a man who was sexually abused by his mother as a child.

Lighter fare were the two feature films in which Schwarz appeared in 2017: The children's film "Hanni & Nanni - Mehr als beste Freunde" and the romantic love comedy "Auf der anderen Seite ist das Gras viel grüner". At the beginning of 2018, the award-winning psychodrama "Freddy/Eddy" (2016) was released in German cinemas. In the film Schwarz plays the wife of a man (Felix Schaefer) who suddenly develops a threatening alter ego.

In 2018 she had a smaller part in the second (and last) season of Matthias Schweighöfer's thriller series "You Are Wanted". Bora Dagtekin cast Schwarz as the hostess of a revealing dinner among friends for his ensemble comedy "Das perfekte Geheimnis".