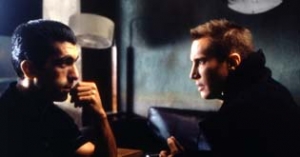 Trust Me
Nils, Caro and Tayfun: They used to be best friends when they were young. They shared everything, and together they were on the top of the world. But their friendship fell apart when Caro couldn´t decide whether to be in love with Nils or Tayfun. So each went their own way. Suddenly, for the first time in six years, Nils and Tayfun meet again. Nils has become a cop and is getting ready to raid a café where drugs are trafficked - and Tayfun is the owner of the place. To help his old friend, Nils makes a batch of heroin disappear from the café. He is busted for his labour of love. The police put the heat on him and force him to collect evidence against Tayfun as an undercover agent. Officially, Nils is suspended from duty. Tayfun blames himself for the mess and welcomes his old friend with open arms. But then Caro appears on the scene and for a moment it seems as if nothing had ever changed. But, in fact, everything is different.