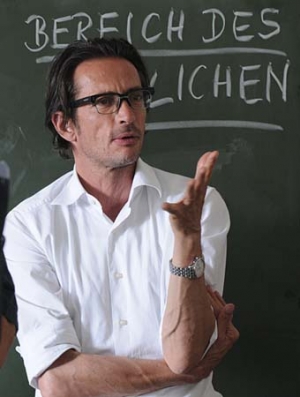 Oskar Roehler, born January 21, 1959, in Starnberg, as the son of writer Gisela Elsner (who later emigrated to the GDR) and Luchterhand editor Klaus Roehler. Oskar Roehler grew up with his father in Berlin. From the beginning of the 1980s on, Roehler worked as a writer und published "Abschnappuniversum", a collection of stories, in 1984. He wrote screenplays for Christoph Schlingensief ("Terror 2000", 1992) and for Niklaus Schilling ("Deutschfieber, 1992), among others. In 1995, Roehler made his debut as a director with the one-hour long low budget production "Gentleman".

In 1997, Roehler won the award as "Best new director" at the Munich film festival for his second film "Silvester Countdown" ("In With The New", 1996). Three years later, he made his final breakthrough with "Die Unberührbare" ("No Place To Go", 2000), a film about the life of his mother. Roehler won the German film award for "Best picture" as well as several awards from international festivals (including Miami, Karlovy Vary, and Rotterdam); furthermore, Hannelore Elsner won the German film award and several festival awards for her performance in the leading role. Roehler's next films were "Suck my Dick" (2001), which received mixed reviews, and the highly-praised "Der alte Affe Angst" ("Angst", 2003) in which he deals with his father's dying.

After "Agnes und seine Brüder" ("Agnes and His Brothers", 2004), a film that received mainly positive reviews and won the Bavarian film award for "Best screen play", Roehler turned to the highly anticipated film version of a novel: For "Elementarteilchen" ("Elementary Particles", 2006), the film version of Michel Houellebecq's novel of the same name about sexual confusion, that was produced by Bernd Eichinger, Roehler put together a cast of German film stars. Moritz Bleibtreu even won the actor's award at the 2006 Berlinale. Although the film received controversial reviews, the film became a large success at the box office.

After a three-year break as a director, Oskar Roehler presented his eleventh film at the beginning of 2009: "Lulu & Jimi", a drama about the love affair of a young German woman and an African-American man in the German province of the 1960s. His next film "Jud Süß – Film ohne Gewissen" ("Jew Suss - Rise and Fall") about the production of the infamous nazi propaganda film and the story of its leading actor premiered at the Berlin Film Festival 2010 and was controversially discussed by audiences and critics alike.

In February 2013 Roehler's adaptation of his own autobiographical novel "Herkunft" opened in cinemas: "Quellen des Lebens" ("Roots of Life") tells the story of a German family from the postwar period to the Time of Flower Power. In his next film "Tod den Hippies, es lebe der Punk" ("Punk Berlin 1982", 2015), a young misfit flees from the province to the wild Berlin of the 1980s.

In 2017 Roehler started filming another adaptation of a novel: "HERRliche Zeiten" ("Subs") is a comedy about a well-off couple that is looking for a household help and as a weird joke puts out an ad titled "Slaves Wanted", which has unexpected consequences. In his next feature film "Enfant terrible" (2020), Roehler paid homage to Rainer Werner Fassbinder. The film with its stylised, theatrical settings aesthetically references Fassbinder's universe and focuses on the life and work of one of the most important German film directors who polarised both professionally and privately.