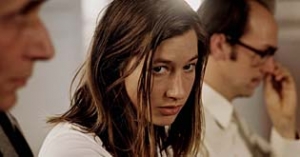 Nick Keller is not without reason known as the black sheep of his family. He has never been able to hold a job. So he’s not exactly optimistic when the job centre finds him a position in a psychiatric clinic, especially since it turns out that he’s been hired to keep the place clean. In this very clinic Leila saunters along the hallways in her nightgown and barefoot as usual. She has been locked up all her life – at first by her overly protective mother, and since she died, in the clinic. Why keep on living?

Nick is just in time to save her from committing suicide. But he has no idea of the consequences this will have for him. In Leila’s mind, he is the first person who has ever done anything especially for her. When he leaves, she secretly follows him into his own world, a world she has never experienced before. Barefoot.

That’s all Nick needs. His stepfather Heinrich rejects him altogether, his career-obsessed brother Viktor is about to marry Nick’s first great love Janine, and his mother is the only one who takes his side. And no matter what he does, Leila never leaves his side. Somehow he kind of likes the way she is – finally a woman who admires him and needs him. And so he even dares to take her home to his parents where he is expecting a major confrontation with the family…

For his second feature film behind the camera, in which he also plays the leading role, Til Schweiger was able to gain the services of actress Johanna Wokalek – Germany’s Shooting Star 2006 – for the role of Leila. The result is most unusual love comedy.