Dream Factory and State Enterprise – The History of Ufa 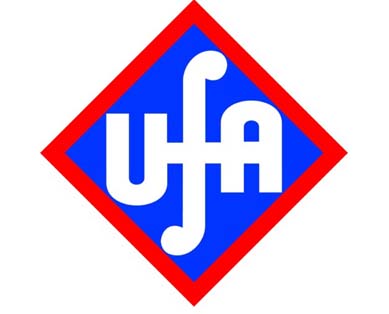 Ufa was Germany's national film company, both in self-image and in market dominance. With close connections to the state, the Deutsche Bank and conservative financing groups, Ufa dominated the German film industry from 1917 to 1945. Never before and never again did one German film company bring together such a wealth of stars and artists while simultaneously gaining such power and influence.

Taking the Lead from the Start

On December 18, 1917 the Universum-Film AG (limited company) was entered into Berlin's commercial register with stock capital of 25 million marks. Founded with state support, Ufa made targeted use of existing resources, buying up several existing film companies with the help of its financial cushion. And soon it began to work on its artistic reputation: Ernst Lubitsch filmed high-budget historical films alongside his lively comedies; his "Madame Dubarry" (1919), starring Pola Negri, Emil Jannings and Harry Liedtke, met with effusive praise in Europe and the USA. When Lubitsch filmed "Anna Boleyn" with Jannings and Henny Porten in the fall of 1920 in the Tempelhof studio, President Friedrich Ebert paid a call on the director who was bringing in the foreign currency. "A prestige film! He'll show the rest of the world the progress the German film industry has made." With the takeover of its competitor Decla-Bioscop in November 1921, along with Decla's ambitious founder, producer Erich Pommer, Ufa increased its creative potential immensely. The Neubabelsberg film studios it had taken over were bustling with activity. In 1924 the "creative producer" Pommer initiated what was probably the most fertile partnership in German silent film: director Friedrich Wilhelm Murnau, screenwriter Carl Mayer, cameraman Karl Freund and set designers Robert Herlth and Walter Röhrig. Their first film together was "Der letzte Mann" ("The Last Laugh", 1924), with Emil Jannings in the leading role. "Please come up with something new, even if it's crazy," Pommer requested, and one of these crazy ideas was nothing less than the "unchained camera," used here for the first time to develop a consistently filmic narrative method. In the USA the film was received as enthusiastically as was E. A. Duponts "Varieté" (1925) soon afterards — once again with Karl Freund at the unchained camera and Emil Jannings in the lead. With its vertical structure, the Ufa made money in three ways at once: as producer, distributor and cinema owner. In addition, the weekly Ufa newsreels were politically and financially important; with around 100 copies, they were number one in the field. All that was lacking to offer the cinemas a complete program were documentaries.

A Crisis and a New Beginning 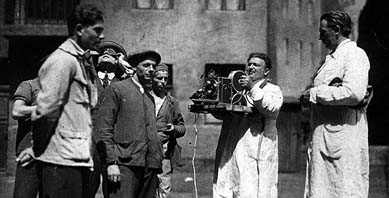 In the mid-1920s, by which time Ufa employed 5,000 people, losses in the tens of millions led Ufa to sign the Parufamet Contract with the American studios Paramount and Metro-Goldwyn-Mayer. The joint distribution company was supposed to distribute 60 films a year in Germany, 20 each from Paramount, Ufa and MGM. However, the agreement brought just the opposite of salvation: The financial fiasco of Fritz Lang's "Metropolis" and the devastating company report for the years 1926/27 marked the low point of the Ufa Crisis.Head of production Erich Pommer was forced to leave Ufa, and arch-conservative Alfred Hugenberg, who had been passed over when the Ufa was founded, took over the battered company in a skillful maneuver. Hugenberg became chair of the supervisory board, and his close friend Ludwig Klitzsch became president. Within two years Klitzsch turned the wreck of the Ufa back into the flagship of the German film industry. In tough negotiations, Klitzsch managed to ease the barely-fulfillable conditions of the Parufamet contract, and he rehired Erich Pommer, restoring Ufa's previous high standards to Babelsberg. 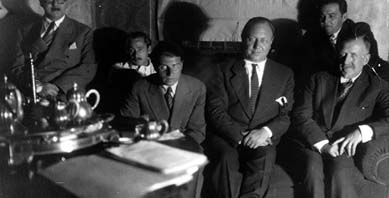 In 1929, four years after the failure of the "Tri-Ergon section of Ufa", the sound film had triumphed once and for all. The Ufa's first "one-hundred-percent" sound film, "Melodie des Herzens" ("Melody of the Heart"), with Dita Parlo and Willy Fritsch, premiered on December 16, 1929, and shortly after that "Der blaue Engel" ("The Blue Angel", 1929/30) marked an early highlight of Ufa's sound film production. Emil Jannings, who had won the first Oscar in Hollywood in 1927, was supposed to be the star of the film — but the real star turned out to be the little-known Marlene Dietrich, who turned her back on Germany and Ufa the day after the premiere and absconded to Hollywood. "Liebeswalzer" ("Waltzes of Love"), with the celebrated "dream couple" Lilian Harvey and Willy Fritsch, set the tone for Ufa's early sound films. Here director Wilhelm Thiele developed a form of film operetta which he went on to use with success in the musical comedy "Die Drei von der Tankstelle" ("Three Good Friends"). By letting the song and dance scenes develop out of the plot, he anticipated an important element of subsequent Hollywood musicals. With Thiele, the brothers Kurt and Robert Siodmak, the screenwriters Billy Wilder and Robert Liebmann, and the composers Werner Richard Heymann and Friedrich Hollaender, Erich Pommer had mustered a new team of young talents. All of them — of necessity — would soon be headed for careers in Hollywood. 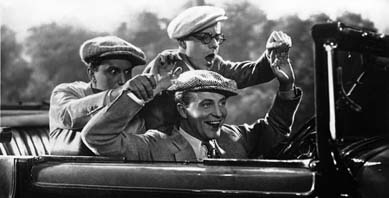 Adolf Hitler's appointment as Reich Chancellor on January 30, 1933 put an end to the German republic. With political power moving into the hands of the National Socialists and propaganda minister Joseph Goebbels installed as the "patron of German film", the pressure on Jews in Ufa's staff increased. In the spring of 1933, unresisting, the company fired its Jewish employees "due to the national revolution". Erich Pommer was fired as well and emigrated to Paris in May.Ufa productions such as the patriotic submarine film "Morgenrot" ("Dawn", 1932/33) became a symbol of the "new times" touted by the Nazi regime. In 1933, before open propaganda was increasingly replaced by sheer entertainment with ideological overtones, Goebbels celebrated the Ufa propaganda film "Hitlerjunge Quex" ("Hitler Youth Quex") as a milestone: "The Ufa and all those who worked on this film have done a great service not only to the development of German film, but also to the artistic implementation of National Socialist ideology." At the same time, however, Ufa also produced extraordinary works of film such as the comedies and melodramas of Reinhold Schünzel and Detlef Sierck, before the two were forced to flee to the USA in 1937/38 to escape racial and political persecution. They, too, were an example of the huge toll taken on German film by the Nazis' policies of expulsion and destruction. Those who had not already fled in 1933, like Fritz Lang, Billy Wilder, and Peter Lorre, emigrated later, or else they were murdered by the Nazis, like Otto Wallburg, Kurt Gerron, and many others.

Nationalization — from the Ufa to the UFI 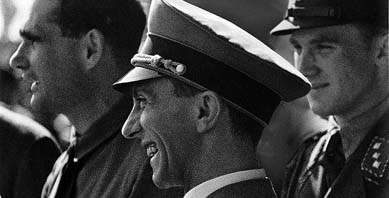 In 1937 the Nazi government intensified its activities with regard to the covert nationalization of the film industry. The goal was secretly to buy up shares of the companies in question and become controlling partners without claiming a seat on the supervisory or executive board. In the course of this policy, Hugenberg was "bought out" of Ufa, while Klitzsch remained president and later became chair of the supervisory board. Finally, by merging the four largest production companies Ufa, Terra, Tobis, and Bavaria the Nazis established a state-controlled super-enterprise: the Ufa Film GmbH, known as UFI.The companies merged under UFI were intentionally left with a certain degree of autonomy, but there was hardly any way for them to develop profiles of their own. All the companies produced anti-Semitic, militaristic, and hate films. At Ufa, director Karl Ritter excelled at filming Nazi material non-stop, films like "Verräter" ("The Traitor", 1936), "Patrioten" ("Patriots", 1937), "Über alles in der Welt" ("Above All in the World", 1940/41), and "Stukas" (1941). But even after World War Two began in 1939, these blatant propaganda films did not predominate. The cinemas showed mainly comedies, melodramas, and revue films featuring stars like Marika Rökk in "Tanz mit dem Kaiser" ("Dance with the Kaiser"). 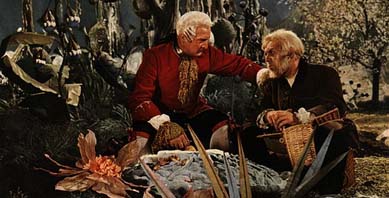 While Hollywood had successfully produced Technicolor films since the mid-1930s, the comedy "Frauen sind doch bessere Diplomaten" ("Women Are Better Diplomats") was Ufa's first color feature film, premiering in 1941 in Agfacolor. And of course the image project for the Ufa's 25th jubilee in 1942 could only be a color film after all, it was supposed to demonstrate the capabilities of German film in World War Two. It had to display all the technical tricks the German dream factory had up its sleeve; and the "Münchhausen" story, featuring a sensational ride on a cannonball, was the perfect material. "Münchhausen" was conceived as a showy spectacle full of fantastic details and with a star-studded cast headed by the German superstar Hans Albers as the Baron of Lies. For the screenplay they recruited a banned author whose debarment from the profession was suspended especially for this production: Erich Kästner. But even the pseudonym he chose, "Berthold Bürger" (Bürger means "citizen") was left out of the credits. Other people were setting the tone at Ufa — at the company's jubilee Klitzsch declared: "In 1933 the fertile marriage between time and film was fulfilled. National Socialism's struggle for the soul of the German people seized upon this unused yet highly effective weapon."

Filming Up to the End 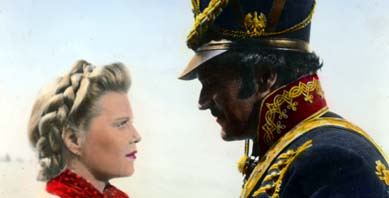 These "weapon producers" worked until Germany’s defeat in 1945 finally brought the end of World War Two in Europe. While on all sides everything was reduced to rubble and the theaters were closed, the cinemas played on to the very end, and the Ufa studios in Tempelhof and Babelsberg went on making films. Hans Deppe made the family comedy "Wie sagen wir es unseren Kindern" ("How Will We Tell Our Parents"), while Erich Engel filmed the comedy "Fahrt ins Glück" ("Ride into Happiness"). Wolfgang Liebeneiner’s major production "Das Leben geht weiter" ("Life Goes On") was never finished, but Veit Harlan’s perfidious morale-building propaganda film "Kolberg" — the most expensive Ufa film of all times, costing 8.5 million marks — premiered on January 30, 1945. Helmut Käutner's masterpiece "Unter den Brücken" ("Under the Bridges") was filmed on the rivers around Potsdam. However, this melancholy love story with Hannelore Schroth, Carl Raddatz, Gustav Knuth, and Hildegard Knef was not released until after the war, as a "deserter". By then, the Ufa city in Babelsberg had long since been reduced to piles of rubble, and Ufa had been seizedt by the Allies as property of the destroyed "Third Reich".On May 17, 1946 the Soviet military administration granted the license to found the Deutsche Film-AG to a group of committed filmmakers and Communist Party members. As at the founding of Ufa in 1917, the first thing to be determined was the abbreviation: DEFA — a clear allusion to the Ufa.