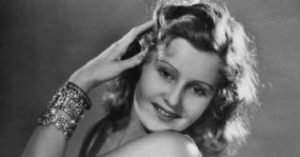 Lilian Harvey was born as Lilian Helen Muriel Pape in London-Hornsey on January 19th 1906. Her mother Ethel Pape (née Laughton) was married to German merchant Walter Bruno Pape, who due to his extended stays abroad could possibly not be Lilian's actual father. Lilian and her older siblings Marjorie and Walter Pape (who later would become a photographer and cameraman) grew up in London, where she was trained as a ballet dancer. At the beginning of WWI, the family was on a holiday in Magdeburg and subsequently moved to Berlin. Lilian spent the war years at her aunt's estate in Solothurn (Switzerland). After graduating from school in the spring of 1923, she joined Mary Zimmermann's ballet company at the state opera Berlin, and later that year went on tour in Czechoslovakia, Hungary and Austria.

After changing her name to Lilian Harvey – the maiden name of her grandmother –, she was hired for the revue programme "Wien, gib acht!" at the Ronacher Theater in Vienna. During rehearsals, film director Robert Land cast her for "Der Fluch". Afterwards, director and producer Richard Eichberg put her under contract: She doubled Eichberg"s wife Lee Parry in "Die Motorbraut" before she got her first starring role in "Leidenschaft". This was followed by the comedy "Liebe und Trompetenblasen", which turned out to be a big success for Eichberg and Harvey. In 1926, it was also Eichberg who hired Willy Fritsch as Harvey's partner for "Die keusche Susanne", thereby bringing together for the first time the later "dream couple of German cinema".

In the summer of 1928, Harvey was able to dissolve her contract with Eichberg. After two lawsuits and a transfer fee of 75.000 Reichsmark, she signed a three-year-contract with Universum-Film AG. Following a short stint in England and three more silent features for Ufa, Wilhelm Thiele's "Liebeswalzer" (1930) – again starring Willy Fritsch – was Harvey's first sound film. The polyglot Harvey also starred in the French and English ("Love Waltz") versions of the film. With the immensely successful music comedies "Die Drei von der Tankstelle" (1930), "Der Kongreß tanzt" (1932), "Ein blonder Traum" (1932) and "Ich und die Kaiserin" (1933), Ufa built Harvey's star image and coined her the "sweetest girl in the world".

On the set of "Der Kongreß tanzt", she made the acquaintance of Hungarian-born Paul Martin. Over the next years, Martin was not only her favourite director but also her life partner. In the spring of 1932, she was signed by 20th Century-Fox, and in 1933, Harvey moved to Hollywood. But since her four US productions – "My Lips Betray", "My Weakness", "I Am Suzanne" and "Let's Live Tonight" – were no big hits, she returned to Europe in 1935. After filming "Invitation to the Waltz" in England, she signed a new contract with Ufa, on the condition that her films would be directed by Paul Martin and her actings fees would be paid in foreign currencies.

She was able to follow her earlier successes with the melodrama "Schwarze Rosen", but especially with the comedies "Glückskinder" and "Sieben Ohrfeigen", which brought her back together with her screen partner Willy Fritsch. Yet, her dramatic range became more visible in films like "Fanny Elßler" (1937) and "Cappriccio" (1938).

After Harvey stood up for persecuted choreographer Jens Keith and helped him to escape to Switzerland, she was interrogated by the Nazi's secret police Gestapo. Although she had already left Paul Martin and invested her money in her estate in Hungary, Harvey returned once more to Germany to fulfil her contract: "Frau am Steuer" was to be her last Ufa production. In the spring of 1939, Lilian Harvey emigrated to France, leaving most of her fortune behind. Jean Boyer directed her in "Sérénade", a production she partly funded, and in "Miquette", the last film of her career: Both films failed at the box-office.

After the war broke out, Harvey – who owned the Villa Asmodée in Juan-les-Pins since 1931 – supported the French troops in Paris, and took care of detained foreigners near her home in Cap d"Antibes. In 1940, she was awarded the Citation à l'Ordre de l'Armée and was named patron of the 157th artillery regiment. When the Germans threatened to occupy Southern France, Harvey emigrated to the United States via Barcelona and Lisbon. She lived in Hollywood from October 1941 on, and worked two years as a nurse for the Red Cross in Los Angeles. Although she was offered a few minor roles – among them one in Michael Curtiz' "Casablanca" (1942), she refused to return to filmmaking. In October 1944, she appeared in a CBS music broadcast. As a stage actress, she starred in several plays, most notably in a highly successful production of Noel Coward's "Blithe Spirit" which toured extensively in the US.

At the end of 1946, Harvey returned to Paris, where she starred in the show "Paris s'amuse". As a singer, she toured in Denmark and Egypt. At the beginning of the 1950s, she made her first appearances in the Federal Republic of Germany. Many more followed, and Harvey also starred in "Geisterkomödie", a German-language adaptation of "Blithe Spirit" done by Curt Goetz.

In 1953, Lilian Harvey married Danish theatre agent Hartvig Valeur-Larsen. They were divorced four years later. Between 1957-1961, she mostly resided in Juan-les-Pins, where she opened a fashion boutique and had several holiday homes built on her property. From 1961 on, she attempted several comebacks as a stage actress, but her performances went mostly unnoticed.

Lilian Harvey passed away in Juan-les-Pins on July 27th 1968.