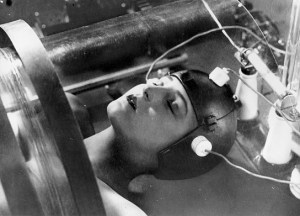 Metropolis – the city of the future. Fritz Lang′s monumental science fiction film combines visual power with a love story around the reconciliation of labor and capital: Joh Fredersen rules the city from high above while the workers are non-stop plodding underground. Fredersen′s son Freder falls in love with Maria, the workers′ leader. At the same time, Rotwang, the inventor, creates a steel robot and is instructed by Fredersen to model it after Maria. The fake Maria then instigates the workers who leave their machines and thus cause the flooding of the city. But Freder′s and Maria′s last-minute effort finally saves Metropolis from downfall. The ruler of the city and the workers realize that the "head" and the "hands" belong together.