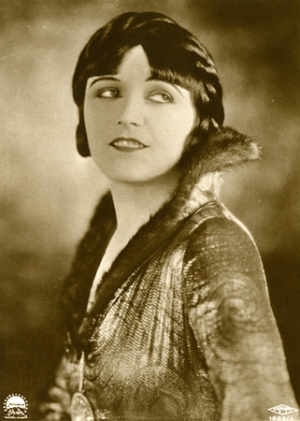 Pola Negri was born as Barbara Apolonia Chalupec in Lipno/Poland on January the 3rd 1897. She started ballet training at the Teatr Wielki in Warsaw at age eight, and later continued her education in St. Petersburg. Due to an illness, she had to quit professional dancing, and enrolled at the stage school in Warsaw. She debuted at the Kleine Theater in 1912, and from 1913 on, she was a member of the National Theatre.

In 1914, Negri got her first screen role in "Niewolnica zmysłow", already playing the part of the sometimes threatening, sometimes naïve vamp for which she would become known. Out of admiration for Italian poet Ada Negri, she changed her name to Pola Negri. A double role in "Nicht lange täuschte mich das Glück" marked her screen debut in Germany, where she eventually rose to stardom under the direction of Ernst Lubitsch: His films "Carmen", "Die Augen der Mumie Ma", "Madame Dubarry", "Sumurun" and "Die Bergkatze" made her famous, and since "Madame Dubarry" was a tremendous success in the US – where it was distributed under the title "Passion" –, Negri was signed by Adolph Zukor for Paramount. She was the first German screen actress to make the move to the United States, a place she claimed to have dreamed about all her life: "It is like heaven to which people go for eternal happiness. (…) Always people return rich or send money back."

She starred in "Belladonna", playing a ruthless woman who stops at nothing and who finally meets her fate in the form of a vicious panther. But Negri moved on, more and more eschewing the exotic clichés of her earlier roles. Now she got praise from US critics for her subtle humour and "European sophistication", and Negri was subsequently cast as the gallant lady who brings audiences to tears in sentimental scenes. In 1924, Negri enjoyed her biggest success in Hollywood with "Forbidden Paradise" by Lubitsch, while "Hotel Imperial" by Mauritz Stiller arguably marked her best performance in an American feature. She continued to play women coming from a foreign background, whether it was the Italian aristocrat in "A Woman on the World" or the French farmer wife in "Barbed Wire".

Yet Negri's private life made more headlines than her films, especially when a planned wedding between her and Charlie Chaplin made the news in 1922. They never married, and their relationship ended in a public exchange of profanities. Equally spectacular was her breakdown at the funeral of Rudolph Valentino, who allegedly was her lover and husband-to-be.

When her contract ended in 1928, Negri's popularity had already faded due to numerous scandals, while her Polish accent proved to be a problem with the coming of sound cinema. She returned to Europe and first worked in England and France, before she had her real comeback in Germany with Willi Forst's "Mazurka". She is frequently cast as the devoted mother and wife, for instance in "Tango Notturno" and "Moskau-Shanghai".

At the beginning of WWII, Negri was living in France, and in 1941, she emigrated to the US. In 1943, she starred in "Hi Diddle Diddle", making fun of her new Vamp persona. She became an naturalized US citizen in 1951, and – after several planned film projects in Europe didn't materialize – later proved to be a higly successful businesswoman, running a real estate firm in her new hometown San Antonio, TX. She did only return once to feature filmmaking, playing an eccentric Egyptian lady in the Disney production "The Moon-Spinners" (1964). In 1970, her autobiography is published under the – characteristically humble – title "Memoirs of a Star". Negri was married to the Polish count Dombski, from 1918-1920. In 1927, she married the Georgian prince Sergius Mdivani, who eventually turned out to be an imposter. She was divorced in 1931.