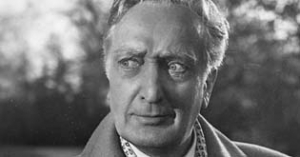 Hans Philipp August Albers was born in Hamburg-St.Georg on September the 22nd 1891 as the son of a local butcher. Dropping out of school and abandoning an apprenticeship in a paint shop, he worked as a clerk in textile factory in Frankfurt and began to take acting lessons. He debuted as a stage actor in Bad Schwandau, followed by engagements in Frankfurt, Güstrow, Cologne and Hamburg.

After being wounded twice in WW I, Albers returned to the theatre and finally moved to Berlin, where he performed in numerous revues and operettas as actor, singer and dancer. In 1928, he got his first "serious" part playing the waiter Tunichtgut in Ferdinand Bruckner"s play "Verbrecher". 1931 saw Albers impressively embodying the title role of Franz Molnar"s fairground-drama "Liliom", a part he would eventually continue to play in more than 1800 performances. When the play was finally cancelled in 1933, Albers quit the stage for good.


Since 1917, he had also been working as a supporting actor in motion pictures, playing everything from con artists, crooks and bigamists up to romantic lovers, playboys and gentlemen. With the introduction of sound, Albers screen career really took off. Now he was offered starring roles which suited perfectly his daredevil charm and hands-on attitude. He rose to fame as the daring adventurer in films like "Bomben auf Monte Carlo", all the while cleverly blending the heroic antics of his characters with mild doses of melancholy, for instance in "F.P.1 antwortet nicht" and "Münchhausen". But from 1933 on – after the Nazi-government virtually took control of film production in Germany –, Albers was also the star of films which openly catered to the "Führer"-principle of National Socialist ideology like "Flüchtlinge" or "Carl Peters".

After WW II, Albers reunited with long-time love Hansi Burg – a German Jewess who survived the Holocaust in England – and lived with her in the small Bavarian town of Garatshausen at the Starnberg Lake. He frequently performed on stage, reprising his signature role as "Liliom" in Berlin and playing Mackie Messer in the Munich staging of Brecht's "Three Penny Opera". Among his memorable post-war screen roles were the caring father in "Und über uns der Himmel" and the aging industry tycoon in "Vor Sonnenuntergang".