Hitler's appointment to the office of chancellor in 1933 spelled the end of the German Republic, yet it meant no radical change of direction for Ufa or the German film industry. After all, aside from a few productions by outsiders, one can hardly claim that, as a whole, the German film industry was progressive or supported republicanism. That being said, we should be careful to make a distinction between nationalism and National Socialism. As head of the German National People's Party (Deutschnationale Volkspartei), Ufa's supervisory board chairman Alfred Hugenberg served as economics minister in Hitler's first cabinet, but, realizing his political impotence, he resigned after only a few months. He revealed no anti-Semitic tendencies, yet with the transfer of power to the National Socialists, the pressure they applied through the media and administration intensified, and in spring 1933, all of Ufa's Jewish employees were dismissed. At the same time, Ufa was one of the media companies in the Weimar Republic that helped lay the ideological groundwork for the dictatorship with its anti-republican stance. Probably the best example of this is the idealized figure of "Old Fritz" played by Otto Gebühr in "Das Flötenkonzert von Sanssouci" (The Flute Concert of Sans-Souci, 1930). This was the only Fridericus film starring Gebühr that Ufa produced itself, and in December 1930, it got caught between two fronts of a political battle. After Nazis disrupted a screening of the American adaptation of Remarque's "Im Westen nichts neues" (All Quiet on the Western Front), the Chief Censorship Office banned the film; and members of the left, for their part, took revenge on "Das Flötenkonzert von Sanssouci", seen as a stand-in for the rightwing, patriotic films that had been inundating cinemas for quite some time. The battle was now being fought in the cinemas themselves. 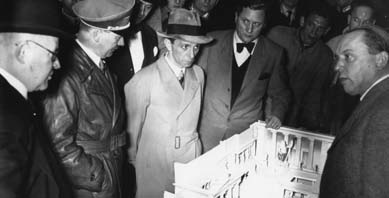 Source: DIF
Ludwig Klitzsch, Adolf Hitler and Joseph Goebbels (1 - 3 from left) during a visit of the set of "Amphitryon" (1935)

The National Socialists consciously chose the title of the patriotic submarine film "Morgenrot" (Dawn, 1932/33) - directed by Gustav Ucicky for Ufa - as the symbol of the "new age" they claimed to represent. Accompanied by Minister Hugenberg and other cabinet members, the new chancellor, Adolf Hitler, paid a demonstrative visit to its premiere at the Ufa-Palast am Zoo on April 2, 1933. Showing the gallant battle and heroic death of a German submarine crew in the First World War, the movie clearly illustrates Ufa's conflicted position. Lines like "We Germans might not know how to live, but we know how to die" are interspersed with scenes that have pacifist overtones - scenes that not only cast doubt on the point of a heroic death but also commemorate the enemy's casualties. It is no coincidence that precisely these episodes were struck from the re-release in 1939. Aside from cinematic precursors and pillars of the Nazi dictatorship, Ufa made a number of outstanding entertainment films that, at least for a limited time, showed another spirit. Though classified as a "half-Jew", Reinhold Schünzel was able to work with a special permit; and he received international kudos for fast-paced comedies like "Viktor und Viktoria" (Viktor and Viktoria, 1933) and "Amphitryon" (1935). The young director Detlef Sierck also attracted international attention; with his two Zarah Leander films "La Habanera" (1937) and "Zu neuen Ufern" (Life Begins Anew, 1937), he made his first successful attempt at the cinematic genre of the melodrama, which he brilliantly perfected in the 1950s under the name Douglas Sirk. He directed numerous masterpieces - not in Germany, though, but in Hollywood, where he fled in 1937/38, as did Schünzel.