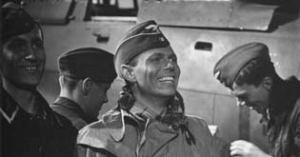 One of the Luftwaffe-assisted NS-flight films, in which the war is rendered a joyous adventure. An officer is severely wounded in a "Stukas" campaign (German Sturzkampfbomber) against France and falls under a severe depression. If only someone would send him to the Richard Wagner festival at Bayreuth, he would be restored. As the Siegfried melody sounds, he seizes a new zeal for life and wants to get back to his comrades. The unity gives them the fervor to resume the war – this time against England.