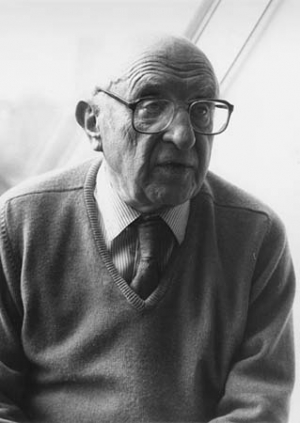 Kurt Siodmak was born August 10, 1902, in Dresden. He studied mathematics and began to publish stories from the mid-1920s on. In 1928, Siodmak started to write screenplays and developed the documentary feature film "Menschen am Sonntag" (People on Sunday) which eventually became the first success for his brother, director Robert Siodmak. The film version of Siodmak's novel "F.P. 1 antwortet nicht" (F.P.1 Doesn't Answer) about the construction of an aeroplane platform in the middle of the ocean was Siodmak's last film in Germany before he left for Tessin in 1933 and later went to France to escape the Nazi regime.

In France, Siodmak wrote the script for "La crise est finie" (The Depression Is Over), an optimistic evocation of the crisis, directed by his brother Robert. But due to his insufficient command of the French language, Siodmak had to leave for England. In London, Siodmak finally enjoyed his international break-through with the adaptation of Bernhard Kellermann's novel "Der Tunnel" (The Tunnel), directed by Maurice Elvey.

In 1937, Siodmak emigrated to the USA where he was already known for his science fiction stories. He started to work for Paramount and was repeatedly employed as a "script doctor". In 1938, Siodmak and Billy Wilder participated in the foundation of the "Screenwriters Guild of America". At Universal, Siodmak made his name as science fiction and horror movie specialist with the screenplay to the eminently successful "The Invisible Man Returns". Furthermore, he became an international star with the novel "Donovan's Brain" he wrote in the summer of 1942. In 1943, Curt (by now spelled with a "C") Siodmak obtained American citizenship and reported to the "Office of Strategic Services". After an initial operative's training in San Diego, he worked in a propaganda department in Washington and wrote leaflets against Nazi Germany.

Due to an agreement with his brother Robert not to work in the other one's field of director and screenplay writer, respectively, Curt Siodmak did not direct another movie until 1951, after his brother had returned to Europe.

In 1998, Curt Siodmak came to Berlin for the extensive retrospective of the Siodmak brothers' work at the Berlinale. On September 2, 2000, Curt Siodmak died of cancer at his ranch in Three Rivers, California.