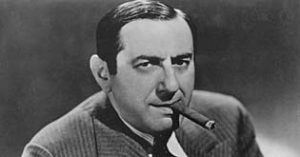 Ernst Lubitsch was born January 29, 1892, in Berlin, as the son of master tailor Ssimcha (Simon) Lubitsch and his wife Anna, born Lindenstaedt. He went to preschool from 1899 to 1902 and then attended Sophien-Gymnasium. In 1908, he started an apprenticeship at Hoffmann & Co.'s mercer shop at Königsstraße. Later, Lubitsch became an accountant in his father's shop. After Lubitsch met actor Victor Arnold, he became his student and started to sporadically perform at cabarets and on minor arts stages. With Arnold's help, Lubitsch became an actor for small roles at Max Reinhardt's Deutsches Theater. At first he worked as an extra and understudy but soon performed in premieres. From 1914 to 1918, Lubitsch mainly worked with Reinhardt and other directors.

In 1913, Lubitsch started his film career and probably played his first part in "Die ideale Gattin", a film by Deutsche Bioscop GmbH, a production company that signed him for a short time. In 1914, he played the clerk Moritz Abramowsky in Carl Wilhelm's film "Die Firma heiratet" ("The Firm Weds"). The film was produced by Projektions AG "Union" (PAGU), a production company that employed Lubitsch for the next couple of years. There, Lubitsch created a role type that became hugely popular with the audience: the cunning and cheeky apprentice who wins through with his freshness and slyness, who manages to make a rise and who becomes the "Der Stolz der Firma" ("The Pride of the Firm"), as Wilhelm's next film with the new star comedian was programmatically called.

In the autumn of 1914, Lubitsch finished his first film as leading actor and director at the same time: "Fräulein Seifenschaum" ("Miss Soapsuds"). In 1914/15, he set up the production company Malu-Film together with the actor Ernst Mátray and produced at least two films for the company. At this point in time, Lubitsch had already asserted himself as director, writer and actor of comedies. With his at times rude humor he met the tastes of contemporary movie goers. In 1915, Pagu started its "Lubitsch series". During the following years, Lubitsch also brought in two more writers, at first Erich Schönfelder, and later Hanns Kräly. Theodor Sparkuhl became his main cinematographer, and Kurt Richter his set designer. At that time, Lubitsch turned actors like Ossi Oswalda, Harry Liedtke, Victor Janson, and Margarete Kupfer into stars.

In 1916, Lubitsch finished "Schuhpalast Pinkus" ("The Shoe Palace"). In the film, he played Sally Pinkus, the apprentice and later owner of a shoe store: "In the moral sense, Sally Pinkus would be a flexible opportunist. But Lubitsch does not pass moral judgements that divide people into good or bad. His characters are both good and bad, and Lubitsch caused a stir with this diagnosis." (Witte, 1984).

In 1918, Lubitsch started a collaboration with Pola Negri and Emil Jannings with the film "Die Augen der Mumie Ma" ("The Eyes of the Mummy"), a "dramatic major production". In the same year, he also finished one of the first film versions of Prosper Merimee's "Carmen" with Negri. ""Die Austernprinzessin" ("The Oyster Princess") was my first comedy that suggested a definite style." (Lubitsch). The daughter of an Oyster King (Ossi Oswalda) wants to marry Prince Nucki (Harry Liedtke) because her husband has to be an aristocrat even if he is completely penniless. "The film catches one"s eye with innvations like the timing of the shots, the visualisation of the decors, and the choreography of the characters." (Prinzler, 1984).

For Argus-Film Berlin, Lubitsch made a film version of Strindberg's "Rausch" ("Intoxication") in 1919, starring Asta Nielsen. In the same year, he finished "Madame Dubarry" ("Passion"), his first major historical film. Extensively, Lubitsch used the resources that PAGU granted him. "Die Puppe" ("The Doll"), a small masterpiece, shows Lubitsch in the prologue, arranging a toy landscape and figures from a box: an homage to the power of the director with a wink. With "Sumurun" ("One Arabian Night"), "Anna Boleyn", and "Das Weib des Pharao", Lubitsch continued his series of historical films. The sale of a film to a European country alone amortized the enormously high spending for the films during the time of inflation. Furthermore, since the success of "Passion" (= "Madame Dubarry"), Lubitsch was able to export his films to the US market. This economic endeaveour was organisationally backed by the cooperation of Ernst Lubitsch Film GmbH with the newly-found E.F.A. (European Film Alliance).

In mid-December of 1921, Lubitsch and Paul Davidson, a director for Pagu/Ufa, went to America to negotiate Lubitsch's first US film that was supposed to be shot in the New York studios of Famous Players. But the plan fell through. After his return to Berlin, Lubitsch started to work on his last film in Germany, "Die Flamme", that premiered in Vienna and did not premiere in Berlin until the autumn of 1923.

In December 1922, Lubitsch went from Bremerhaven to New York. Mary Pickford had invited him to Hollywood to shoot a film. He was never going to work in Germany again. During the shooting, tensions developed between Lubitsch and his leading actress and producer. Although the film was a success with critics and movie goers alike, Lubitsch's contract was cancelled.

Gradually, the "Lubitsch touch" developed. "Actually, it is not at all about telling a story, but rather to find a way to not tell the story at all. (...) The key factor is that the subject is never treated directly. When we are standing in front of room doors, while the action is inside, when we are with the servants, while the action is happening in the salon, and in the salon, when the action is on the staircase, and in the telephone booth, when the action is in the basement, it only happens because Lubitsch, humble as ever, has racked his brain for six weeks and in the end grants the audience to simultaneously construct a screen play with him, while the film is playing on the movie screen." (F. Truffaut, Cahiers du cinema, February 1968).

Lubitsch soon ranked among Hollywood's most sought-after directors. In 1926, he cancelled his contract with Warner and directed "The Student Prince in Old Heidelberg" for M-G-M. In 1928, he started his collaboration with Paramount. His first film for Paramount, "The Patriot", starred his old star Emil Jannings in the leading role. Jannings even won the first Academy award for an actor for his performance. The mountain melodrama "Eternal Love" became Lubitsch's last silent film.

He then started a series of movie operettas: "The Love Parade", "Monte Carlo", "The Smiling Lieutenant". Once again, Lubitsch's films were innovative and shaped the style of future movies. "Trouble In Paradise" is a classic comedy film: "This movie seemed to have everything: the grace and elegance of the 20s, the egalitarian conscience of the 30s, the visual wit of the silent cinema and the verbal wit of the talkies." (Sarris, 1980). In 1934, he made another film for M-G-M, "The Merry Widow", based on a screen play by Ernest Vajda and Samuel Raphaelson, who wrote most of his films of the 1930s. In February 1935, Lubitsch, who was stripped of his German citizenship by the Nazis on January 28, 1935, became head of production of Paramount but only stayed in this position for one year.

Instead, Lubitsch became the head of his own production group in May 1936. He finished "Angel", with Marlene Dietrich in the leading role, "Bluebeard"s Eighth Wife", starring Claudette Colbert, and "Ninotchka", starring Greta Garbo, for M-G-M. Billy Wilder collaborated on the screen play of the two last films, thus bringing a satirical edge into the comedies. "Garbo's 'Ninotchka' is one of the sprightliest comedies of the year, a gay and impertinent and malicious show which never pulls its punch lines (no matter how far below the belt they may land) and finds the screen's austere first lady of drama playing a dead-pan comedy role with the assurance of a Buster Keaton." (F. S. Nugent, The New York Times, November 10, 1939).

In 1942, Lubitsch finished "To Be Or Not To Be", an exposing satire about a group of actors in Nazi-occupied Warsaw. Attacked by critics, Lubitsch responded: "The American audiences don't laugh at those Nazis because they under-estimate their menace, but they are happy to see this new order and its ideology being ridiculed." (The New York Times, March 29, 1942).

Still in 1942, he went to Twentieth Century Fox and directed "Heaven Can Wait". Furthermiore, he was in charge of Otto Preminger's film "The Royal Scandal" and Joseph L. Mankiewicz's film "Dragonwyck" as a producer. And although he was still suffering from a heart attack, Lubitsch directed his next film, "Cluny Brown", in 1946. On March 13, 1947, he was awarded a special Academy award "for his distinguished contributions to the art of motion picture". But Lubitsch was not able to complete his last film "That Lady In Ermine". Instead, Otto Preminger finished the film.

"Lubitsch's films are made like fashion and they work like fashion. They are seductive. They arouse desire and lust. He demonstrates our liability to contagion from the inside, with the resources of the cinema. He bluntly shows that that is what cinema thrives on." (F. Grafe, Süddeutsche Zeitung, September 22, 1979).

Ernst Lubitsch died from a heart attack on November 30, 1947, in Hollywood and was buried on December 4 at the Forrest Lawn cemetery.