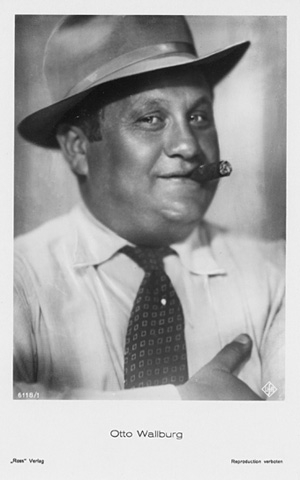 Otto Maximilian Wasserzug was born in Berlin on February 21st 1889. The son of a Jewish banker gave his stage debut in 1909, and after serving in WWI he became one of the most popular actors due to his performances as the overweight "comic relief".

In 1926, Wallburg made his screen debut in "Die keusche Susanne". He established himself as a poignant character actor in a wide variety of genre films – ranging from the comedy "Der Himmel auf Erden" (1926/27) to the crime caper "Der rote Kreis" (1928). His masterful play with dialects and his physical presence made him the ideal sound film comic. Especially Reinhold Schünzel frequently cast Wallburg, who also played the lead in Alfred Zeisler's "Der Hochtourist".

After the new Nazi regime quickly took control of the film industry, Wallburg was forced into exile. He fled to Vienna, and in 1937, he emigrated to the Netherlands. Before the Nazi invasion, he performed at the Jewish theatre Joodsche Schouwberg. He went into hiding but was denounced in February 1944. Otto Wallburg was deported to Auschwitz, where he was murdered in October 1944.