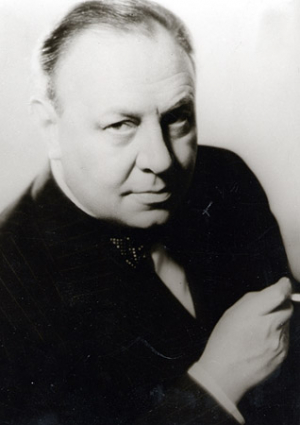 Theodor Friedrich Emil Janenz, born July 23, 1884, in Rorschach (Canton St.Gallen, Switzerland) as the son of German-American merchant Emil Janenz and his wife Margarethe Schwabe, grew up in Leipzig and Görlitz. He left school in ninth grade and worked as a shipboy. In 1900, he took over the job of a trainee at Stadttheater Görlitz and performed at traveling and provincial theatres from 1901 on. From 1907 to 1908, he performed in Stettin, from 1908 to 1911 in Bonn where he also directed several productions, from 1911 to 1912 in Königsberg, from 1912 to 1913 in Nuremberg (together with Werner Krauß), and from 1913 to 1914 in Darmstadt and in Bremen.

In 1914, he went to Berlin and became a cast member of Reinhardt-Bühnen in the theatre season 1915/16. In the meantime, he performed at Künstlertheater and at Kleines Theater and also made his movie debut in the war propaganda film "Im Schützengraben". At Reinhardt's theatre, he at first mainly played smaller and mid-size roles. In 1916, he directed Gustav Kaltenbach's comedy "Familie Schimek" at Deutsches Theater, and from 1917 on, he also played larger roles, for instance, the role of Wehrhahn in "Der Biberpelz" ("The Beaver Coat") by Gerhart Hauptmann, or the role of Gustav Hein in Hermann Bahr's "Das Konzert" ("The Concert"). In the summer of 1918, he went to Königliches Schauspielhaus where he made his first performance in the role of judge Adam in Kleist's "Der zerbrochene Krug" ("The Broken Jug"). At the end of 1918, he returned to Deutsches Theater but left the cast in June 1920.

From 1916 on, Jannings regularly appeared in films, mostly in quickly filmed melodramas that covered the topics of love and passion, money and crime. The role of Louis XV in the period film "Madame Dubarry" ("Passion"), directed by his former fellow cast member Ernst Lubitsch, became the turning point of his career: With the film's international success, Jannings soon became a star and subsequently focused on his movie career instead of the theatre. However, the film's success restricted him to the portrayal of decadent, debauched rulers like Henry VIII in "Anna Boleyn" ("Deception"), Amenes in "Das Weib des Pharao" ("Pharao's Wife"), or the title role in "Peter der Große" ("Peter the Great"). Again and again, Jannings embodied this type of character in his films of the early 1920s.

Together with Paul Davidson, he set up the production company Emil Jannings-Film GmbH in late 1922 but liquidated the company already after the production of one film, "Alles für Geld" ("All For Money"). Lubitsch who was supposed to be the third party of the company had decided to stay in the US.

After his return from Italy, where he had played Nero in an international cast for the film "Quo Vadis" in 1923/24, Jannings managed to turn away from period pieces in two films that were produced by Ufa in 1924 and 1925: In "Der letzte Mann" ("The Last Laugh"), Jannings played a concierge who is demoted to bathroom attendant, and in "Varieté" ("Variety"), he played a circus performer who commits a murder out of jealousy. In these films, Jannings succeeded to arouse sympathy and understanding for characters who at first belie their fears and despair with a rough behaviour. The international success of both films brought Jannings a three-year contract with Paramount.

In October 1926, he went to Hollywood. His US films were mostly made according to "Der letzte Mann" and "Varieté", in particular, the successful German paragons: Jannings played characters who lose their place in society and end in misery, men who perish by love. For "The Way of All Flesh" (a bank teller leaves his job and his family for an adventuress) and "The Last Command" (a former Belarussian general hires out as an extra in Hollywood), Jannings became the first male leading actor to receive the Academy Award in 1929.

As Czar Paul I in "The Patriot", Jannings and director Lubitsch tried to repeat the success they had with their films in Germany. His first sound film project was a film version of the comedy "Das Konzert" by Hermann Bahr, but Jannings feared that he would not be able to match the requirements of English-language films and thus, decided to return to Germany.

He returned to Berlin in May 1929 and filmed "Der Blaue Engel" ("The Blue Angel"), the film version of Heinrich Mann's novel "Professor Unrat" in the winter of 1929/30: Although the film was planned as Jannings' comeback in Germany, it became the starting point for Marlene Dietrich's Hollywood career who outplayed Jannings throughout the film.

From 1930 on, he performed at the theatre again, multiple times in plays by Gerhart Hauptmann: in 1930, he played the role of Wehrhahn in "Der Biberpelz", in 1932 the title role in "Fuhrmann Henschel", and the role of privy council Clausen in "Vor Sonnenuntergang", a role he resumed in the film "Der Herrscher" ("The Ruler", 1936/37). In 1933, he again played the role of judge Adam on stage (and in 1937 in the film). In May 1934, he became a cast member of Staatliches Schauspielhaus where he made his last stage performance in 1936 in the role of Bismarck in "Der Ministerpräsident" by Wolfgang Goetz.

With his films from the early 1930s, Jannings was not able to match his success with earlier films. He did not regain stardom until he starred in Nazi films. His performance as Friedrich Wilhelm I in "Der Alte und der junge König" ("The Making of a King") was the starting point to a series of films in which Jannings played historic characters as precursors to Hitler. Geheimrat Clausen in "Der Herrscher", the title roles in "Robert Koch, der Bekämpfer des Todes" and in "Ohm Krüger" ("Uncle Krüger"), the role of the "Iron Chancellor" Bismarck in "Die Entlassung" ("The Dismissal): these roles all formed a "historic line: Friedrich der Große – Bismarck – Hitler" (Jannings, October 4, 1942).

In 1936, he became a member of the board of directors of Tobis and became its chairman in 1938. At first under the term "Head artistic director", later as an independent producer, he was able to officially influence the conception and direction of his films. Thus, he was mainly responsible for the production of "Ohm Krüger" in 1940/41, one of the most expensive Nazi film productions ever.

This film marked the pinnacle of the attempt to interpret history in terms of National socialism, and to justify current politics with historic models. In the film, the Boer War serves as a pretense to illustrate the inevitability of a war against England, the politician Paul ("Ohm") Krüger is over-magnified as a Führer character who is "designated to start a fight that is finished in our times" (Jannings, 1941).

In January 1945, the shooting of "Wo ist Herr Belling?" ("Where Is Mr. Belling?"), his last but unfinished film, was interrupted because Jannins fell sick. In 1946, he was denazified by the occupation forces and became a citizen of Austria in 1947.