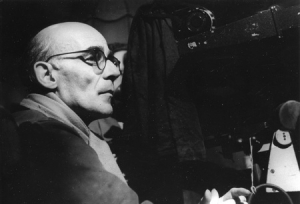 Erich Engel was born in Hamburg on February 14, 1891. After a year's apprenticeship at a coffee wholesaler, the merchant's son Erich Engel attended Leopold Jessner's acting school in Hamburg from 1909-11, followed by engagements at traveling theaters. After being drafted in 1914, he worked as a typist in a military hospital. 1917 he became a dramaturge at the Deutsches Schauspielhaus in Hamburg, 1918-21 he was a dramaturge and director at the Kammerspiele. 1922 Engel moved to Munich, where he made the acquaintance of Bertolt Brecht and Caspar Neher. His successes at that time include the premiere of Brecht's "In the Jungle of the City".

1923, together with Brecht, he had his first attempt at film making with the Karl Valentin grotesque "Die Mysterien eines Frisiersalons". He then was responsible for stage productions at various theaters, mostly in Berlin, including the 1928 premiere of Brecht/Weill's "The Threepenny Opera" at the Theater am Schiffbauerdamm. Only after the introduction of sound film became Engel more interested in the artistic possibilities of film. From 1930 to 1935 he exclusively directed films, his preferred genre being comedy. In eleven films from "Wer nimmt die Liebe ernst?" (1931) to "Viel Lärm um Nixi" (1941), Jenny Jugo was his star. Despite having to make concessions to Nazi censorship after 1933, he succeeded again and again in portraying the changeability of man and circumstances, a subject matter which was close to his heart.

In the late 1930s, he staged Shakespeare productions at the Deutsches Theater in Berlin and was Artistic Director of the Munich Kammerspiele from 1945 to 1947. In 1948/49 he staged productions together with Brecht at the Deutsches Theater in Berlin. In 1948 he made "Affaire Blum" at DEFA, in which he draws a realistic picture of Germany in the 1920s under the shadow of rising fascism on the basis of a murder case. For the film he was awarded a national prize. After "Der Biberpelz", his second DEFA film, plans for a film version of Brecht's "Mother Courage and Her Children" failed. The Brecht/Engel model production was recorded for television in 1957, though and became the basis of the Palitzsch/Wekwerth film version in 1959/60).

From 1950 to 1955, he made films in the FRG, including "Der fröhliche Weinberg" (1952) based on the play by Carl Zuckmayer. He then was Art Director for "Pünktchen und Anton" (1953), directed by his son Thomas Engel and based on the novel by Erich Kästner. After Brecht's death in 1956, he continued Brecht's production of "Life of Galileo" at the Berliner Ensemble and - living in West Berlin - worked exclusively in the GDR in the following years. At the Berliner Ensemble he was a member of the artistic management and temporarily chief director.

He also shot his last feature film in the GDR, "Geschwader Fledermaus" (1958), based on a stage play by Rolf Honold. Set in a mercenary milieu, the adventure film was about an American pilot who begins to have doubts about his missions for the French army during the Indochina War.

At the Berliner Ensemble, Engel enjoyed an outstanding success with his new production of the "Threepenny Opera" (1960). Also in 1960, he became a professor at the Academy of Arts.