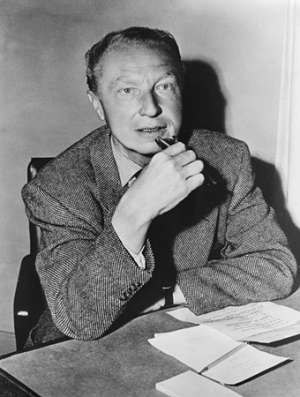 The son of a teacher, Hans Detlef Sierck was born in Hamburg on April 26th, 1897. After completing his military service in the navy, he started studying in 1917, first in Jena and then in Munich, Freiburg and Hamburg. Beginning his studies in law, he later changed to philosophy, becoming eventually a newspaper editor at the Neuen Hamburger Zeitung. Between 1920/21 he was an assistant dramaturgist at the Deutschen Schauspielhaus in Hamburg, while his debut as director was in 1923. Sierck is director and head of productions at theaters in both Chemnitz and Bremen until 1938 as well as theater manager at the Altes Theater in Leipzig between 1929 and 1935. Having trouble with the Nazis, he cancels his contract, moving to Berlin, where he continues to direct. From 1934, he shoots short films for the Ufa Studios.

While his first full-length feature is the comedy "April, April!" (1935), his first big success is "Schlußakkord" (1936) with Lil Dagover and Willy Birgel. With the melodramas "Zu neuen Ufern" and "La Habanera" in 1937, Sierck makes Zarah Leander into a star. After a trip to rome at the end of 1937, Sierck doesn't return to Germany and works on various film projects in Switzerland and the Netherlands. Receiving a contract from Warner Bros. in 1939, he goes to the USA.

The émigré and producer Seymour Nebenzahl engages Sierck, who now calls himself Douglas Sirk, as director for the film "The Hangman" in 1942. "Hitler’s Madman", a film dealing with the Heydrich assassination and subsequent destruction of the town of Lidice is brought out by MGM in 1943. Sirk also shoots some independent B-movie productions. After 1950 he directs for Universal Pictures several comedies, "Americana" and adventure films as well as the melodrama "Magnificent Obsession" in 1953.

Moving to Lugano-Tessin in 1959, Sirk stage directs in Munich and Hamburg off and on from 1963 to 1969. As assistant professor at the University for Television and Film in Munich between 1974 and 1978, he is in charge of taking care of three short films. Involved among others is Rainer Werner Fassbinder, who considers Sirk’s work to be exemplary.