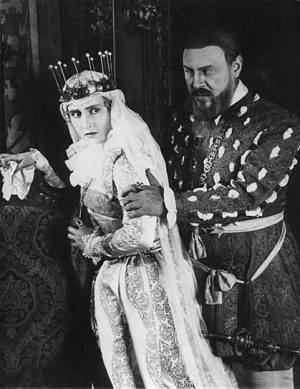 Anna Boleyn is the niece of the Grand Duke of Norfolk and is called to serve Queen Catharine at her court. One day in the castle, a small accident occurs, which changes her life. On the Queen’s Names Day, Anna’s dress gets stuck in the door.

During this incident, King Henry VIII. notices her, finding this fine looking woman very interesting. He follows her, wooing her, but Anna remains loyal to her young friend Henry Norris. Only after Henry VIII. offers her the crown, she does concede. Against the bitter opposition of both his wife Catharine as well as the Pope, Henry pushes through a divorce, celebrating a splendid wedding with Anna - the Anglican Church is formed. The recent happiness, however, finds a sudden end, when Henry’s hoped for successor to the throne, born by Anna, turns out to be a daughter. He begins an affair with the courtly maiden Johanna Seymour, while Anna is accused in court of adultery supposedly committed with her old friend Norris. Anna is condemned to death. Already during her execution, Henry is preparing for his next wedding.