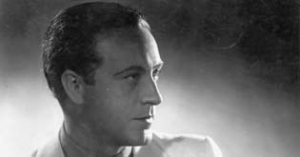 Wilhelm Egon Fritz Fritsch was born on January 27th 1901 in Kattowitz (today: Katowice, Poland) as the son of Lothar Fritsch, a farmer and machine manufacturer, and his wife Anni (née Bauckmann). In 1910, after his company went bankrupt, the father took a position as head of production at the Siemens factory in Berlin. Young Wilhelm followed him two years later, and after finishing school, he took up an apprenticeship as a mechanic for Siemens which he didn't finish. Subsequently, he worked as a messenger and scrivener at the Distict Court in Berlin.

In 1919, he took up acting lessons and was cast in smaller roles at the Deutsches Theater and the affiliated Kammerspiele, and finally was put under contract as an ensemble actor. He predominately played young lovers and comic parts, and in 1922, he joined the Reinhardt Ensemble on its tour through Scandinavia.

From 1921 on, Fritsch began to appear in movies, for instance "Miss Venus". In 1923, he auditioned for the leading role of the blind artist in the melodrama "Seine Frau, die Unbekannte", which was then re-written in order to fit his rather sunny nature. Fritsch convincingly played the would-be son of an aristocrat in Joe May's "Der Farmer aus Texas", which made him the new star of the production company Ufa, and the dashing Lieutenant Niki in Ludwig Berger's "Ein Walzertraum". The latter turned out to be a significant success in the USA, but Ufa intervened when United Artists offered Fritsch a contract.

"Der Prinz und die Tänzerin" and "Der letzte Walzer" basically followed the formula of "Ein Walzertraum", and Fritsch only occasionally altered his well-established image in films like "Die Boxerbraut" or "Spione" and "Frau im Mond", both directed by Fritz Lang.

In order to prepare him for his first sound film "Melodie des Herzens", Ufa had Willy Fritsch take singing lessons. Fritsch had already played alongside Lilian Harvey in "Die keusche Susanne" (1926) and "Ihr dunkler Punkt" (1928), and the two actors teamed up again for the seminal film "operetta" "Liebeswalzer", which established Harvey/Fritsch as the immensely popular "dream couple of German cinema".

They followed "Liebeswalzer" with a string of successful musical comedies, including "Einbrecher", the box-office hit "Die drei von der Tankstelle", "Der Kongress tanzt" and "Ein blonder Traum". Each of these films featured several Harvey/Fritsch songs, which became popular hits and were also released on records, and thereby further added to the popularity of the two stars.

Fritsch had a long-term contract with Ufa and was paid a monthly salary of 20.000 Reichsmark per month, which was doubled during in the 1930s. Eschewing his trademark sonny boy persona, he proved his range as a character actor in films like "Ich bei Tag und Du bei Nacht", "Walzerkrieg" – starring Renate Müller – and Reinhold Schünzel's satirical romp "Amphitryon".

After Harvey had returned from Hollywood, Fritsch joined her in the propagandistic drama "Schwarze Rosen", as well as in "Glückskinder", a rather satisfying attempt to emulate Hollywood's concept of screwball comedy. In 1939, "Frau am Steuer" was to be the last collaboration between Fritsch and Harvey, who made twelve films together. While Harvey – who opposed the fascist regime – left Nazi Germany and emigrated via France to the USA, Fritsch continued his career throughout the 1940s with new partners like Marika Rökk and Marte Harell.

After the end of the war, Fritsch relocated to Hamburg. He spoofed his own image as the romantic lover in "Film ohne Titel", and excelled as the comical conférencier in "Herrliche Zeiten". Although still in high demand, Fritsch didn't find satisfying roles in West-Germany's post-war cinema. He remained a popular figure, partly due to his work as the host of nostalgic radio shows.

In 1937, Fritsch married dancer and actress Dinah Grace (née Ilse Schmidt). The couple had two sons, Michael (born 1937) and Thomas (born 1944), who also became an actor. After the death of his wife, Fritsch withdrew almost completely from public life. Willy Fritsch passed away in Hamburg on July 31st 1973.