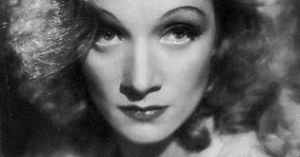 Maria Magdalena Dietrich was born on December 27, 1901 in Berlin-Schöneberg as the second daughter of a police officer. She learned to play the violin during her school time and studied at the Weimar music academy from 1919 to 1921 before she went to Berlin. But when carpal tunnel syndrome cut short her career as a musician, Dietrich started to work as a model and attended Max Reinhardt's drama school. She already performed in very small roles at several theatres during actor's training.

In 1922, Dietrich starred in her first film, "So sind die Männer" ("The Little Napoleon"), and became known to a wider public after playing a courtroom visitor heavily flirting with the proscutor in Joe May's four-part movie "Tragödie der Liebe" ("Tragedy of Love"). On May 17, 1923, Dietrich married Rudolf Emilian Sieber and gave birth to her daughter Maria in 1924.

In 1925, she returned back to work in the film business, starred in several comedies and revues in Berlin and flirted her way through several smaller roles in a number of silent movies. In "Ich küsse Ihre Hand, Madame" ("I Kiss Your Hand Madame"), the first sound film producton by Tobis, Dietrich appeared alongside Harry Liedtke. In Kurt Bernhardt's melodrama "Die Frau, nach der man sich sehnt" ("The Woman Men Yearn For"), Dietrich finally starred in her first title role.

Dietrich then played in the successful revue "Zwei Krawatten" at Berliner Theater alongside main protagonist Hans Albers as waiter Jean. Director Josef von Sternberg, who at the time was looking for a leading actress for his adaptation of Heinrich Mann's novel, saw Dietrich in "Zwei Krawatten" and eventually cast her for the role of Lola Lola in "Der blaue Engel" ("The Blue Angel"). In February of 1930, Dietrich signed a contract with Paramount and left Berlin on the day of the premiere of "Der blaue Engel".

But when an American newspaper article labeled her, Greta Garbo, and several other actresses, as "box office failures", Dietrich considered to leave Hollywood altogether - instead Josef von Sternberg persuaded her to take Joe Pasternak's offer to play the leading role in the turbulent western comedy "Destry Rides Again". The film's success helped to create a new image for Dietrich. She then consolidated this image with films such as "Seven Sinners", "The Spoilers" and "Pittsburgh".

In March 1943, Dietrich who had by now became an US citizen, started on a three-year tour to entertain US troops. Then, in the middle of 1945, she returned to Germany for the first time since 1932. After Hitler's advent to power, Dietrich had rejected even the most financially attracting offers to work for Nazi film productions. In the late 1940s, Dietrich hosted radio shows and wrote several newspaper articles besides her movie career. In 1953, Dietrich started a new career as a cabaret artist in Las Vegas and appeared less often in movies. Nevertheless, she starred as a procuress in "Touch of Evil" (1958) by Orson Welles as well as in Billy Wilder's "Witness for the Prosecution" (1958), and in Stanley Kramer’s "Judgement at Nuremberg" (1961).

In 1960, Dietrich returned to Germany for a tour that was dogged by controversy due to her engagement for the US troops during World War II. In 1975, Dietrich had to end her career as a cabaret artist after a stage accident in Australia. And in 1982/83, Maximilian Schell recorded several interviews with the actress and used them for a film portrait of her.

Marlene Dietrich died on May 6, 1992 in Paris. By her own request, she was buried on the Friedenau cemetary in Berlin.