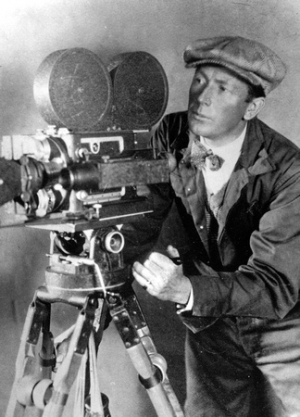 The son of a textile manufacturer grew up in Bielefeld and Kassel, studied art history and literature in Berlin and Heidelberg but dropped out of university to attend Max Reinhardt-Schauspielschule in Berlin. From about 1909 on, he named himself Murnau after a village in Upper Bavaria that he had visited on a bicycle trip with his friend Hans Ehrenbau-Degele. In 1913, he became a cast member of Reinhardt-Bühnen but was drafted for military service one year later. In 1917, he was deployed with the air force before he was detained in Switzerland where he performed on stage and wrote a screenplay to a film.

After the end of the war, he returned to Berlin and finished his first movie, the fantasy film "Der Knabe in Blau" ("Emerald of Death"), in 1919. His next films were also fantasy films: The three-part movie "Satanas" ("Satan", 1919), Murnau's first film with cinematographer Karl Freund and leading actor Conrad Veidt, and "Der Bucklige und die Tänzerin" ("The Hunchback and the Dancer", 1920), that marked the start of Murnau"s collaboration with screenplay writer Carl Mayer. With "Schloss Vogelöd" ("The Haunted Castle", 1921), filmed in only 16 days, Murnau already proved his ability to create an atmosphere of fear and horror, an ability that he masterly refined in his vampire film "Nosferatu – Eine Symphonie des Grauens" ("Nosferatu, a Symphony of Horror", 1921).

Thea von Harbou wrote the screenplays to Murnau"s next four films, including his only comedy, "Die Finanzen des Grossherzogs" ("The Grand Duke"s Finances", 1923). In his silent film classic "Der letzte Mann" ("The Last Laugh", 1924), a film that portrayed the social decline of a hotel concierge who is demoted to bathroom attendant, Murnau needed only one intertitle. For the film, Freund masterly operated the "moving camera". Besides "Der letzte Mann", the literary adaptations "Tartüff" ("Tartuffe", 1925) and "Faust" (1925/26) also rank among the classic films of Weimar cinema produced by Erich Pommer. However, they did not meet contemporary expectations at the box office.

Nevertheless, these films paved Murnau's way to Hollywood where he received a four-year contract from Fox in 1926. Although his first Hollywood film "Sunrise" (1926/27) received rave reviews – the film won an Academy award for his artistic quality – it did not reach a broad audience. As a result, the producers of his next films stepped in: "Four Devils" (1928) was subsequently turned into a happy ending and was equipped with a sound track. The same happened to "Our Daily Bread" (1929/30). Moreover, Murnau was dismissed during the shooting of the film.

Murnau returned to Berlin but his negotiations with Ufa did not lead to a result. In 1929, he traveled to Tahiti where he planned to do a film about the island's inhabitants together with the documentary filmmaker Robert Flaherty. But their ideas and concepts did not match. Thus, Murnau finished the naïve love story "Tabu" (1930/31) at his own expense.

Deep in debt, he returned to Hollywood, where Paramount offered him a ten-year contract. But Murnau died from the consequences of an automobile accident, one week before the premiere of "Tabu".