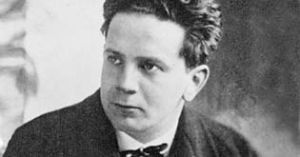 Carl Mayer was born in Graz on February 20, 1894. Because he had to support his family at an early age, he was forced to leave school without a diploma. Around 1914, he began working as an extra and assistant in small theatres in Linz, Salzburg and Innsbruck. In 1917, he was hired by the Residenz Theater in Berlin as an assistant manager. He partook in the founding of the "Dramatische Gesellschaft Berlin", and also directed its first play, the expressionistic anti-war drama "Die Vorhölle".

In May 1917, Mayer and actress Gilda Langer founded the production company "Star-Film Comp". Advertisements announced a series of big pictures starring Langer and to be written, produced and directed by Mayer. Eventually, none of these films were made. In early 1919, Carl Mayer and Hans Janowitz wrote a screenplay titled ""Das Cabinett des Dr. Calligaris", which was later filmed by director Robert Wiene under the title "Das Cabinet des Dr. Caligari" 1919/1920 – but with an additional background story and in an expressionistic manner not intended by the authors. Following the success of the film, Mayer wrote a script which deliberately focused on Gothic imagery and expressionism: "Genuine" was released in September 1920, but the obvious attempt to copy the style of Caligari failed at the box office. Working for Uco Film, a subsidiary of the Decla production company, Mayer wrote the screenplay for "Schloss Vogelöd" and re-wrote a Danish script into "Der Gang der Nacht". Both films were directed by Friedrich Wilhelm Murnau.

At the same time, he wrote "Der Dummkopf" (1921) for director and producer Lupu Pick. He also scripted "Grausige Nächte" (1921), "Scherben" (1921) and "Sylvester" (1921) for Pick"s company Rex Film. Apart from his dense dramatic style, Mayer"s work distinguished itself through his great insights into the mentality of the Protestant lower middle class. "Scherben", "Hintertreppe" (1921) and "Sylvester" would later be known as Mayer"s trilogy of intimate plays – though he did not conceptualise them as such.

In September 1921, Mayer was contracted by Ufa to write four screenplays, of which only one was made into a film: "Vanina" (1922), an adaptation of Stendahl"s novel. The next year, Mayer turned Frank Wedekind"s "Lulu" into a script for the Richard Oswald production "Erdgeist" (1922). He returned to Ufa to write the script for F. W. Murnau"s "Der letzte Mann" (1924). In his screenplay to this classic of German silent cinema, Mayer already included detailed descriptions of elaborate camera movements and of the framing of shots, which were meant to flesh out the characters. He did the same thing in his script for "Tartüff" (1925), although Murnau was not always following his suggestions.

Mayer was a perfectionist, who would sometimes spend more than a year working on a text. He wouldn"t pass out scripts he deemed insufficient, which led to conflicts with Ufa. The company successfully sued him for 50.000 Marks, because he did receive advance payment on scripts he did not deliver.

In 1926, he declined an offer to follow Murnau to Hollywood, and instead relocated from Berlin to Lychen. Drawing from Hermann Sudermann"s novel "Die Reise nach Tilsit", he wrote a screenplay titled "Lied für zwei Menschen" which was turned into Munau"s first American feature film: "Sunrise" (1927), a genuine masterpiece by both the director and the writer. Mayer also wrote the treatment for Murnau"s second Hollywood feature "The Four Devils" (1928).

Mayer frequently worked with Austrian director Paul Czinner and actress Elisabeth Bergner, among their collaborations are the adaptation of Schnitzler"s "Fräulein Else", "Ariane" (1930) and "Der träumende Mund" (1932). During the transition from silent to sound cinema, Mayer primarily worked as an advisor in questions of dramaturgy. In this function, he collaborated with Kurt Bernhardt, Arnold Fanck and Leni Riefenstahl. To reduce his debt, he also worked in the dramaturgy department of Ufa.

After the Nazi's rise to power, Mayer emigrated to Prague in late 1933. Despite his tragic situation, he was still harassed by Ufa, who kept sending dunning letters to the broke exile- In 1935, Mayer relocated to London, not knowing that in the meantime Ufa was selling the rights to some of his silent classics for sound remakes.

In London, he again worked with Bergner and Czinner, but the 1937 crisis of the British film industry left him virtually unemployed. Eventually, he worked as an advisor on several films, including some documentaries directed by his friend Paul Rotha. In 1942, Carl Mayer got a severe case of cancer, which doctors initially failed to diagnose. To ease his pain, he was given narcotics, leading to a morphine addiction. Shortly before his death, Mayer was hired by the Two Cities Filmcomp. He started working on two projects, which were never finished.