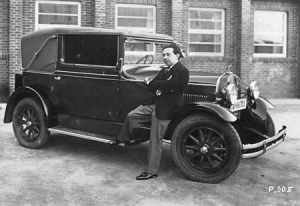 Friedrich Hollaender was born in London – where his parents were performing at Barnum & Bailey – on October 18th 1896. Given his family's extensive musical background, he was introduced to the piano at a very early age. He studied at the Stern'sche Konservatorium and at the Königlich-Preußische Kunstakademie, already writing lyrics along to his compositions. He subsequently became a master student of Engelbert Humperdinck and co-founded a periodical on current literature.

During WWI, Hollaender conducted an orchestra at the Western front. After the war, he returned to Berlin and became the musical director of the "Ballet Charell" at the Komische Oper. He started working with Max Reinhardt at the Deutsche Theater and the revue theatre "Schall und Rauch", where he also collaborated for the first time with his colleague Werner Richard Heymann. In 1919, he married the actress and singer Blandine Ebinger, who was frequently performing the impressive number of songs he wrote for the thriving theatre and variety circuit in Berlin.

He continued to write for numerous theatres and revue shows, also venturing on occasion into the realm of film. Hollaender's own shows and the stage acts he contributed to featured some of the most talented performers of the Weimar Republic, including artists like Kurt Gerron, Dolly Haas, Lucie Mannheim, Valeska Gert and Aribert Wäscher.
His favourite orchestra was the "Weintraubs Syncopators", which was also instrumental in turning the music performed by rising star Marlene Dietrich in Erich Pommer's production "Der blaue Engel" into veritable hits. Hollaender himself played a pianist in the Ufa film, which marked his successful transition to sound cinema.

Although he was much in hig demand as a film composer, Hollaender also continued to work in the theatre. In 1932, he married the dancer and actress Hedi Schoop and in the same year, his revue "Es war einmal" had its premiere. But after several performances were disturbed by Nazi thugs, the show was closed.
Hollaender made his debut as a film director with "Ich und die Kaiserin". One week after the film's premiere, the board of the Ufa was already eliminating contracts with Jewish artists and staff. Hollaender, whose apartment was demolished by the Nazis, emigrated to Paris with his wife. He later wrote about the experiences of the emigrants in his novel "Those Torn From Earth", which was published in 1941 with a preface by Thomas Mann.

In May 1933, Hollaender relocated to the US, where Erich Pommer had negotiated a 3-year-contract at Fox for him. Despite the difficult situation, he was able to establish himself as a composer in Hollywood. Over the years, he worked for different studios and on films of all genres. And although the Hollywood production mode didn't allow him to show his many talents, Hollaender garnered four Academy Award nominations for his soundtracks.
In 1944, Hollaender married actress Leza Hay, followed by his fourth marriage, to Berthe Jeanne Kreder, in 1946.

After the war, he occasionally travelled to Europe while maintaining his career in Hollywood. Hollaender returned to Germany in the mid-1950s and settled in Munich. He directed musical revues – with mixed success –, and later also appeared in television. His notable film credits of these years include Kurt Hoffmanns "Das Spukschloß im Spessart" and Billy Wilder's "One, Two, Three". In 1965, he published his autobiography, which was followed by other, mostly humorous books.

Friedrich Hollaender passed away in Munich on January 18th 1976.