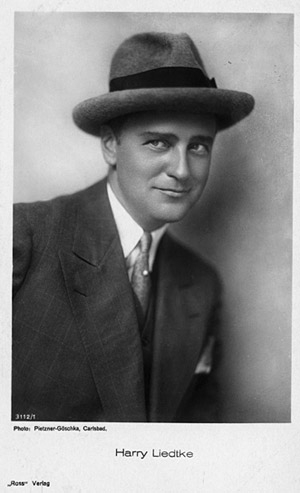 Harry Liedtke was born October 12, 1882, in Königsberg (today: Kaliningrad, Russia), as the seventh of eleven childrens of an import and export merchant who dealt with linseed and hemp. After his father's death in 1896, he lived in an orphanage. He attended Altstädtisches Gymnasium in Königsberg and started an apprenticeship as a merchant in a bank and in a crop commission business after his graduation. He then worked in shop for colonial produce.

During a visit to Berlin, Liedtke met Hans Oberländer, the artistic director of Königliches Schauspielhaus. After several acting lessons, he became a cast member at Stadttheater Freiberg, Saxony, and later worked at Elysium-Theater Bromberg, and at Stadttheater Görlitz, Bad Rothenfelde, Göttingen, and Magdeburg (where he performed under a false name).

Liedtke then became a cast member of Kleines Theater in Berlin but went for a year to New York's New German Theatre, when he hardly got any more role offers in Berlin. After his return, Liedtke got a five-year contract at Deutsches Theater and made his debut at Kammerspiele on May 4, 1909, in Ernst von Wolzogen's comedy "Der unverstandene Mann", directed by Felix Hollaender. He starred in classic and in contemporary plays, for instance, under director Max Reinhardt as Marcellus in "Hamlet" (1909), as Melchior Gabor in "Frühlings Erwachen" ("Spring Awakening", 1910), and as Alwa Schön in "Der Erdgeist" ("Earth Spirit", 1913). In 1913/14, he worked at Mannheim's Hof- und Nationaltheater, then at Berlin's Residenz-Theater. After his one-year military service in Potsdam, he returned to Deutsches Theater where he stayed until 1916.

Liedtke made his movie debut in 1912 and mainly played noble, elegant characters in Messter productions (for instance, in "Eva"). From 1915 on, Liedtke most often appeared in films by Rudolf del Zopp. In 1916, he starred in Stuart Webbs and in Joe Deebs detective stories like "Der Amateur", directed by Ernst Reicher, and "Wie ich Detektiv wurde", directed by Joe May. In 1917, he appeared in several films by Paul Leni, for instance, in "Prima vera", in the role of Sir Archibald in "Das Rätsel von Bangalor" ("The Mystery of Bangalor"), and as the prince in "Dornröschen".

Liedtke then became one of Ernst Lubitsch's preferred actors. He played the youthful charmer in burlesque films, for instance, the rogue Reitzenstein in Lubitsch's "Fledermaus" adaptation "Das fidele Gefängnis" ("The Merry Jail"), or the scruffy prince Nucki in "Die Austernprinzessin" ("The Oyster Princess"). But Liedtke also starred in the historic epics, as Armand de Foix in "Madame Dubarry" ("Passion"), and as Ramphis in "Das Weib des Pharao" ("Pharao's Wife") – "despite his sparse apparel a charming Berlin character; the smile of his mouth and in his eyes is so attractive that jumps into the Nile river in vain as everybody knows that it is the Spree or the Havel river." (K. Pinthus, Das Tage-Buch, March 18, 1922).

Liedtke then played the leading role in "Der Mann ohne Namen" ("The Man Without a Name"), the first six-part film version of Ewald Gerhard Seeliger's best-selling novel "Peter Voß, der Millionendieb"; while his bonvivant charme became his signature feature. Full of cockiness and optimism, Liedtke, one of the first male stars of German cinema, embodied vital recklessness and winning chutzpah. Either as a destitute aristocrat in "Die Finanzen des Großherzogs" ("The Grand Duke's Finances") or as a representative of bourgeois domesticity in "Madame wünscht keine Kinder" ("Madame Doesn't Want Children"), in evening dress or in uniform, in Richard Eichberg's military comedies like "Liebe und Trompetenblasen", or in Friedrich Zelnik's film operettas like "Die Försterchristel" ("The Bohemian Dancer") or "An der schönen blauen Donau" ("The Beautiful Blue Danube"), Liedtke always stood in the centre of attention, an agile gentleman.

"He has an expression of mischievous power, of masculinity without brutality and the air of importance, and smiling, roguish heroics that are truly refreshing." "Normally, us men are never quite convinced when a woman falls in love with another man. But with Harry Liedtke… it’s pretty clear." (B. Balázs, Der Tag, October 30, and March 16, 1923).

The advent of the sound film ended his rise because "Harry Liedtke's voice clouds his great smile." (S. Kracauer, Frankfurter Zeitung, April 13, 1931). Once more, he sailed the seven seas as a disappointed and mysoginic womanizer in "Nie wieder Liebe" ("No More Love") who is put in irons by a mermaid (Lilian Harvey). With his role of the elegant baron who is hooked by Dolly Haas in "Der Page vom Dalmasse-Hotel", Liedtke initiated his change into the department of graying gentlemen and fathers.

But it took him until 1941 until he was able to prove his conversion in a leading role alongside Käte Haack and her daughter Hannelore Schroth and under director Heinz Rühmann as the cheerful and detached patriarch in "Sophienlund" who has to acknowledge the catastrophe of his family idyll because of a concealed misstep.

Liedtke was first married to Hanne Schutt. From 1920 to 1926, he was married to the actress Käthe Dorsch. Together with his third wife, the Reinhardt actress Christa Tordy (= Dr. phil. Anneliese Uhlhorn), Harry Liedtke was killed on April 28, 1945, by members of the Red Army during the occupation of Bad Saarow-Pieskow, his place of residence.