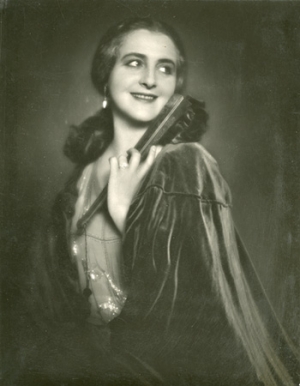 Henny Frieda Ulrike Porten was born in Magdeburg on January 7th, 1890, the second daughter of the opera baritone, Franz Porten, and his wife Wincenzia, whose maiden name was Wybiral. After playing a number of children"s roles on her father"s stage, the family moves to Berlin in 1895. In January 1906, Franz Porten is engaged by Oskar Messter to direct six "Biophon-Sound Pictures" – and so with "Meissner Porzellan" the siblings enter the world of film.

After finishing school (around 1907), Henny Porten performs in numerous "sound pictures" predominantly for the Deutsche Mutoskop- und Biograph GmbH, which at the same time includes her work in their "Mutoskop"-peepboxes. Her work involves singing in any one of three different languages by moving her lips in a synchronized fashion to a gramophone record. Despite having no training whatsoever in acting, this work allows Porten to become a highly experienced and much sought-after actress.

In January 1911, Messter concludes a one month contract with her, which is repeatedly extended. In 1913/14 with the success of "Eva", an "Autorenfilm", there follows the first of the "Henny Porten film star series", beginning with "Der Feind im Land". Following the exodus in the film industry at the beginning of the First World War, Henny Porten initiates, as if personally, the recommencing of cinematographic work in 1915 ("Das Ende vom Liede"). Rudolf Biebrach, who in earlier films often played her father, now takes on the work of film director. Porten films are at the peak of success with German film audiences.

The filming of the theater play "Rose Bernd" in 1919 is a big success, which greatly adds to the prestige of cinematography among German educated classes as well as critics. This is followed with "Monica Vogelsang" and "Anna Boleyn", two of the most expensive projects up till then of the Ufa studios. In March 1921, Porten establishes the company Henny Porten Films GmbH. After the box office hit "Die Geier-Wally" (Wally of the Vultures), Porten produces the highly ambitious studio play "Hintertreppe" (Backstairs). While highly praised by critics, the film is financially unsuccessful. After three further years of rather unsuccessful films, the company goes bankrupt in 1923.

In the light of the "Ruhrkampf", a boycott is called against Henny Porten, reproaching her for doing films for the French company Gaumont ("Die Liebe einer Königin") and accusing her earlier works were being anti-German ("Der Feind im Land"; "Bergnacht"). During 1923/24 she is seen as "box office poison", and can only find work with difficulty. She achieves a renewed comeback aided by the melodrama "Mutter und Kind" ("Mother and Child"), produced and directed by Carl Froelich. On the 26th of September, 1924, the company Henny Porten-Froelich Produktion GmbH is founded in Berlin, in which Porten, Froelich and Wilhelm von Kaufmann are associates. In total, fifteen films are made by 1929, all very well crafted for the general public.

With G. W. Pabst as film director, Porten ventures to do her first sound film in 1930, "Skandal um Eva", completing it with ease. The following year she achieves her long planned for project, the film "Luise, Königin von Preußen", which ultimately bankrupts her company in the summer of 1932. After this project, Porten is considered to be a risk within the film industry. With no film engagements coming, she seeks refuge on stage. She achieves renewed film success in the autumn of 1933, with the sound film remake of "Mutter und Kind", directed by Hans Steinhoff. Porten’s refusal to divorce her Jewish husband increasingly narrows her film options. She has only six small roles by 1943. In 1937 she is taken on by the Tobis company on a work for money basis, but is never offered any work.

After the war, Porten lives in Ratzeburg. Performing in Lübeck and the Hamburg Theater in 1947, she is given a small supporting role in "Absender unbekannt" by the Hamburg company Real-Film in 1949. Other than this, no other acceptable West German film offers are made. Following an invitation made by DEFA, she travels to the GDR on the 17th of June, 1953 ("Carola Lamberti"; "Das Fräulein von Scuderi"). In the Western press her step is branded as that of a "deserter". Returning to Ratzeburg in 1955, the couple is evicted by their landlord. Her husband loses his practice. Through the press, Porten unsuccessfully asks for work in film. They move to Berlin in 1957, where Wilhelm von Kaufmann dies on the 21st of October, 1959. Awarded the Bundesverdienstkreuz in May 1960, Henny Porten dies in Berlin after suffering a severe illness on the 15th of October, 1960.