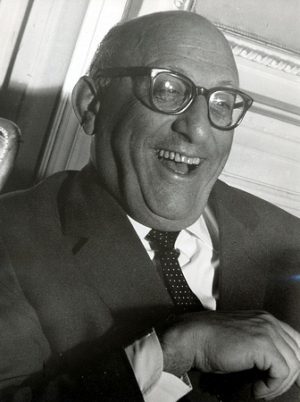 Robert Siodmak at the reception for the premiere of "Nachts, wenn der Teufel kam" at the Hotel Atlantik, Hamburg, on February 7, 1958

Robert Siodmak, born in Dresden on 8 August 1900 was the son of a Polish Jew with American citizenship, who had come to Germany from the USA in 1899 to get married. Already during his secondary school years in Dresden he played small stage roles at the Staatliches Schauspielhaus Dresden and took acting lessons with Erich Ponto. In 1918 he left his parents' house to travel through Germany with a travelling theater.

After attempts to make a career as a bank employee and publisher of his own illustrated magazine, Siodmak turned to the film business in 1925. He began as a translator of intertitles and in 1927/28 he produced cut versions of older films as an editor for the director Harry Piel. In addition, he worked as an assistant director for the production company Nero-Film in Berlin, under the direction of his uncle Heinrich Nebenzahl and his son.

Robert Siodmak made his directorial debut in 1929/30 with the documentary feature film "Menschen am Sonntag" ("People on Sunday"), which he also wrote and produced. Fred Zinnemann, Edgar G. Ulmer and Robert's brother Kurt Siodmak, who was two years younger than Robert, were co-directors and co-writers of the film. "Menschen am Sonntag" brought Robert a contract with Ufa in 1929, where he first worked in the dramaturgy department at the Ufa Wochenschau (newsreel) before he was allowed to direct feature films from 1930.

After Ufa only let him direct romcoms like "Quick" (1932) and he was withdrawn from the ambitious project "F.P.1 antwortet nicht" ("Floating Platform 1 Does Not Answer", based on the novel by his brother Kurt), Siodmak left the production company. For Tonal-Film/Deutsche Universal, he then realized "Brennendes Geheimnis" ("The Burning Secret", after Stefan Zweig) in 1932/33, his last German film before he went into exile. However, the screening was banned by the Reich Ministry of Public Enlightenment and Propaganda, which was established that same year, because it was thought to allude to the Reichstag fire of February 27, 1933. In April 1933 Siodmak moved to Paris with his later wife Bertha ("Babs") Odenheimer as a reaction to the Nazis' seizure of power. His brother Kurt settled in London, the third brother Werner went to Palestine. The youngest Siodmak brother, Rolf, took his own life.

At the French Néro-Films, for whose German headquarters he had worked in the 1920s, Robert Siodmak was able to continue his film work for the time being - until he fell out with producer Seymour Nebenzahl in 1936 after the failure of "La vie parisienne" ("The Parisian Life").

He had his big breakthrough in terms of artistic recognition two years later with the drama "Mollenard", which he realised for the outsider producer Edouard Corniglion-Molinier. His first big box-office success was with the thriller "Pièges" ("Personal Collumn") in 1939. That same year Siodmak moved to America when the war began. Through the mediation of Preston Sturges he was able to gain his footing in the American film business fast. Between 1940 and 1943 he directed a series of B-movies for the Paramount Studio which also "lent" him to 20th Century-Fox and Republic. At the end of 1943 he got a contract for several years at Universal through his brother Kurt (now "Curt") who went to Hollywood as a screenwriter.

Until the end of the 1940s Siodmak realised his famous films of the "black series", such as "Phantom Lady" (1944), "The Suspect" with Charles Laughton (1944) or "The Spiral Staircase" (1945). With "The Killers" (1946) with Burt Lancaster and Ava Gardner, based on a short story by Ernest Hemingway, Siodmak also rises to the first league of directors: He received an Oscar nomination for Best Director, the annual publication Fame chose him as "Champion of Champions Director". At the studios, Siodmak occasionally achieved record fees. Other great successes in the USA are "Criss Cross" (1949) and "The Crimson Pirate" (1952), both with Burt Lancaster in the starring role.

Despite his great success in the USA Siodmak returned to Europe in 1951. After spending time in France and Great Britain, he worked mainly in West Germany from 1954, but lived in Ascona, Switzerland, from 1955. Over the years, his first German film became one of his great classics: the milieu drama "Die Ratten" ("The Rats"), based on a stage play by Gerhard Hauptmann and starring Maria Schell and Curd Jürgens. The film was awarded the Golden Bear at the 1955 Berlinale, cinematographer Göran Strindberg received the German Film Prize for Best Cinematograpy". The crime drama "Nachts wenn der Teufel kam" ("The Devil Strikes at Night", 1957) about the case of the alleged serial killer Bruno Lüdke against the background of National Socialism received an Oscar nomination as Best Foreign Language Film; Siodmak was honoured at the German Film Prize as Best Director.

In March 1957 Siodmak made some test shots with Horst Buchholz for "Die Bekenntnisse des Hochstaplers Felix Krull" ("Confessions of Felix Krull"), which was then directed by Kurt Hoffmann. In 1957/58 Siodmak directed five TV films in London and Munich. Among the some other projects that Siodmak was unable to realize was a production about the Reichstag fire in 1960 with Mario Adorf as Marinus van der Lubbe.

In the 1960s, Siodmak made a series of elaborate entertainment films, such as the three Karl May adaptations "Der Schut" ("The Yellow One", 1964), "Der Schatz der Azteken" ("Treasure of the Aztecs", 1965) and "Die Pyramide des Sonnengottes" ("Pyramid of the Sun God", 1965). The two-part monumental film "Kampf um Rom" (The Last Roman"), based on the historical novel by Felix Dahn from 1876, starring Orson Welles, became Siodmak's last completed film work in 1969.

On March 10, 1973, barely two months after the death of his wife Bertha, Robert Siodmak died of a heart attack in the district hospital of Locarno, Switzerland.