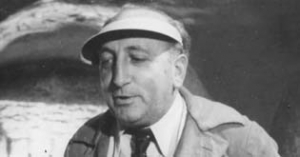 Karl Ritter was born November 7, 1888, in Würzburg. His mother was an opera singer, and his father a professor at a music academy. After finishing high school, he became a regular officer with the Bavarian army. During World War I, he joined the Imperial air force and rose to the rank of major. After the end of the war, he started to study architecture in Munich but then turned towards painting and graphics. Repelled by the conditions in post-war Germany and enthusiastic about National Socialism through the family of his wife, a distant relative of Richard Wagner, he joined the NSDAP in the mid-1920s.

In 1925, Ritter came in contact with the film business for the first time as a graphic designer in advertising for Südfilm AG. He then was in charge of several films as production manager and started to write screen plays. In 1932, he became the head of production of "Reichsliga". In the same year, he finished a short film starring Karl Valentin for the company. In 1933, Ufa hired him as a producer. His first film for Ufa was "Hitlerjunge Quex" ("Hitler Youth Quex", 1933), one of the few Nazi films that openly celebrated the NSDAP. As the director, Ritter chose Hans Steinhoff who besides Ritter and Harlan became one of the most celebrated and involved directors of the Third Reich with films like "Der alte und der junge König" ("The Making of a King"), "Ohm Krüger" ("Uncle Kruger"), or "Robert Koch". In 1936, Ritter started his career as a director with the comedy "Weiberregiment" ("Petticoat Government").

Due to an order by Goebbels to admit actors and directors to the administration of film production companies to improve the quality of German films, Ritter became a member of Ufa's supervisory board in the next year, together with the actors Eugen Klöpfer, Paul Hartmann, and Mathias Wieman, and the director Carl Froelich. In 1939, he was appointed "professor" on the occasion of Hitler's 50th birhtday.

Towards the end of the war, Ritter was called up by the air force and was captured as a prisoner of war in Russia but was able to escape from war captivity to Bavaria. During the "denazification" trials, Ritter was classified as a "fellow traveller" and as a result did not get a license to shoot films in the French occupation zone. In May 1949, he went with his family to Argentina where fellow Germans were instructed by the mediation of Winifred Wagner to enable him to set up a film production company. For Eos-Film in Mendoza, he finished the film "El paraiso" with the participation of numerous fellow Germans, including his three sons Gottfried, Heinz, and Hans. However, the film became a huge flop.

Because of the changing political situation, Ritter returned to West Germany in 1953 and directed the film "Staatsanwältin Corda" in Wiesbaden. The film tells the story of a female lawyer who falls in love with the defendant. Paul Klinger starred in the leading role. With his second production "Ball der Nationen" ("Ball of the Nations"), he returned to the genre of "light" musical comedies. For the film, Zsa Zsa Gabor found rather unusual partners in Gustav Fröhlich and Alexander Golling. In 1955, Ritter set up "Karl Ritter Filmproduktion GmbH" and announced his plan, to make a film version of Frank Wedekind's "Die Büchse der Pandora" ("Pandora’s Box") but was not able to execute his plan.

Despite his faith in "the convalescence of German cinema" and his efforts "to create films whose topics are relevant worldwide", he was not able to establish himself in the German film industry. Ritter eventually returned to Argentina where he died on April 7, 1977.