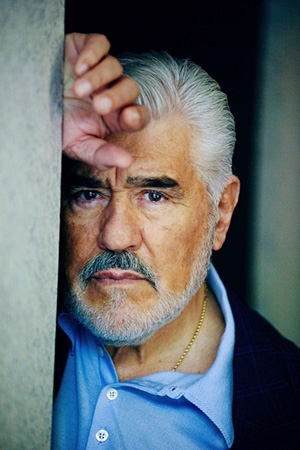 Mario Adorf was born in Zurich on the 8th of September 1930. After graduating from school in the German town Mayen, he went to university and started working as an extra and production assistant at the Zurcher Schauspielhaus. In 1953, Adorf enrolled at the Otto-Falckenberg-Schule in Munich, and subsequently joined the ensemble of the Münchner Kammerspiele, where he worked from 1954-1960.

Adorf made his screen debut in 1954 as one of the German soldiers in Paul May's highly successful WWII-trilogy "O8/15". In 1957, he played a demented mass murderer in Robert Siodmak's "Nachts, wenn der Teufel kam" and was later awarded a Deutsche Filmpreis (German Film Award) for his performance. Mario Adorf was frequently cast as the brooding bad guy, for instance in "Das Totenschiff" and "Winnetou I". Since the mid-1960s, he also appeared in Italian productions, where he could sometimes alter his prevailing screen image by playing more comical parts.

Over the years, Adorf acted in numerous foreign-language films, including turns in "Major Dundee", "Fedora", "The Holocraft Covenant" and "Jours tranquilles à Clichy". From 1970 on, he was one of the most-sought after actors of the New German Cinema and participated in groundbreaking works such as "Die verlorene Ehre der Katharina Blum" and "Die Blechtrommel" – which won the Academy Award for Best Foreign Film –, both directed by Volker Schöndorff.

Retaining his immense popularity, Adorf has been predominately working in television for the last twenty years, most notably in critically acclaimed miniseries such as "Der Schattenmann" and "Der große Bellheim".

Also after his 80th birthday, Adorf maintained his high-profile and industrious schedule as an actor. He starred as a marzipan manufacturer struggling to save his empire in the made-for-TV movie "Der letzte Patriach" (2010). He then delivered a memorable performance as a Czech war criminal who is confronted by the relatives of his victims after the end of WWII in Nikolaus Leytner's "Die lange Welle hinterm Kiel".

In 2012, Adorf returned to the big screen with "Die Libelle und das Nashorn": He plays an aging, narcissistic movie star, who spends an eventful night in a luxury hotel with an upcoming female author, whom he initially dislikes.

He then excelled in Urs Egger's made-for-TV drama "Krokodil" (2013) as a successful writer whose secluded life is turned upside down by a young woman and her little son. In Anna Justice's two-part TV production "Pinocchio" (2013) he featured as the warm-hearted and slightly melancholy woodcarver Gepetto, a distinguished role for Adorf. At the Munich International Film Festival 2013, Lola Randl's "Die Erfindung der Liebe" ("The Invention of Love") premiered. The film that took a long time to finish after the female lead Maria Kwiatkowsky had died unexpectedly in 2011 features Adorf in a minor role as an elegant aristocrat.

He starred in a strong role in "Der letzte Mentsch" ("The Last Mentsch", 2014) as a concentration camp survivor who had started a new life as a "German" after the war and now has to prove his Jewish ancestry in order to be buried on a Jewish cemetery. Shortly after, Adorf featured again in a film widely praised by the critics – Jan Georg Schütte's largely improvised ensemble comedy "Altersglühen" (2014, TV) – where he personified a widower who had promised is dying wife to find a new partner.

After featuring as the main character's father in Dani Levy's comedy "Der Liebling des Himmels" (2015, TV), Mario Adorf returned to where his career had started: The made-for-TV movie "Winnetou" (expected to be aired in 2016) features him as the murderous bandit Santer once again, just like the original from 1963.

He had a smaller but important role as the strict father of the title character in the comedy "Schubert in Love – Vater werden ist (nicht) schwer" (2016). In the low-budget production "Real Fight" (2017) he played the part of an oligarch, in the much-praised TV comedy "Einmal Sohn, immer Sohn" (2018) with Christiane Hörbiger he made a fine guest appearance as a star architect.

In 2018, the city of Worms and the Nibelungenfestspiele Worms awarded the Mario-Adorf Prize, named after Adorf, for the first time. The prize is awarded to participants of the Nibelungenfestspiele. Adorf himself, who was one of the initiators of the festival in 2002 and has been a member of the board of trustees since, is also a member of the jury.

In 2018 he starred in the title role of the ZDF documentary drama "Karl Marx - Der deutsche Prophet". He played his signature role in the two-parter "Alle für die Mafia" (DE/AT) as a Mafioso, who is banished from Sicily to a South Tyrolean village.

In 2019 Mario Adorf himself was the subject of a film: In "Es hätte schlimmer kommen können - Mario Adorf" ("It Could Have Been Worse – Mario Adorf") director Dominik Wessely paints a multi-layered portrait of the legendary actor.