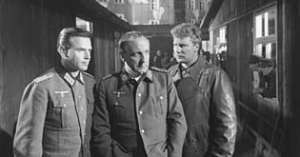 The third part of Paul May′s "08/15" trilogy based on the novel by Hans Hellmut Kirst tales place shortly before the end of World War II: In the spring of 1945, the German troops are practically defeated, and the battalion of Kowalski, major general von Plönnies and Asch who had risen to the rank of lieutenant in the meantime is left to its own devices to a large extent. They hope to be able to wait for the end of the war without having to encounter any combat operations. At the same time, Asch tries to prevent high-level Nazi officers from disappearing unnoticed and from cashing in on the chaotic circumstances.