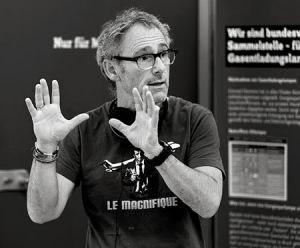 Dani Levy was born in Basel (Switzerland) on November 17th 1957. After graduating from school, the son of an emigrated German-Jewish family had his first stage experiences working as a clown and acrobat in the Basilisk Circus and though he lacked formal training, he was cast as an actor for the Basel theatre and – following a stint in the USA – for the Rote Grütze theatre in Berlin.

In 1984, he gained prominence as a TV actor in the Swiss series "Motel", playing the kitchen aid Peperoni. Two years later, he made his directorial debut with "Du mich auch", which he scripted together with his real-life partner Anja Franke. Levy and Franke also played the leads in the romantic comedy, which was co-directed by Franke and Helmut Berger. The low-budget production turned into a surprise festival hit and was chosen for the "Semaine de la Critique" at the Cannes International Film Festival.1986 saw the release of Levy's second feature "RobbyKallePaul", in which he starred alongside his life-partner and co-author Maria Schrader. The film about a flat-share won the audience award at the 1989 Max-Ophüls-Preis Festival.

In 1990, Schrader and Levy wrote the screenplay for "Meschugge", which was eventually filmed in 1998. Since "Meschugge" was delayed, Schrader and Levy instead made "I was on Mars" (1991), the story of a love-triangle set in New York. In 1993, Levy won the Director's Award at the Munich Film Festival for his short "Ohne mich".

In 1994, he co-founded the X-Filme production company together with Tom Tykwer, Wolfgang Becker and Stefan Arndt. The company's first feature film, the drama "Stille Nacht", screened in the competition of the 1996 Berlin International Film Festival.

1998 saw the premiere of "Meschugge" at the Toronto International Film Festival, and the film about a young Jewish woman from New York who investigates a dark family secret went on to win the awards for Best Production and Best Camera at the Bavarian Film Prize.

Levy, who apart form his own films continued to appear as an actor in other directors" works, made the drama "Väter" (2002) about a divorced man desperately trying to gain custody for his little son. In 2004, he shortly returned to the theatre: In Basel, he staged the play "Freie Sicht aufs Mittlemeer".

The same year, he had his biggest box-office success to date with "Alles auf Zucker!". The comedy about a Berlin Jew, who according to his mother's last wish has to reconcile with his deeply religious brother, won the Ernst-Lubitsch-Award. The jury called it a "renaissance of the German-Jewish comedy tradition". In a spectacular sweep, "Alles auf Zucker!" also won the awards for Best Direction, Best Screenplay and Best Film at the 2005 German Film Prize.

After partaking in the omnibus film "Deutschland "09 – 13 kurze Filme zur Lage der Nation", Levy completed his next feature: The comedy "Das Leben ist zu lang" tells of a Jewish director, who suffers from an existential crises and awakes in an altered reality following a botched suicide attempt.

Switching to television, Levy next directed the Swiss "Tatort" entry "Schmutziger Donnerstag" (CH 2013) and the comedy "Der Liebling des Himmels" (2015) starring Axel Milberg. In a memorable turn as an actor, he played famous Israeli state attorney Chaim Cohn in the award-winning "Der Staat gegen Fritz Bauer" (2015). In 2015, Dani Levy staged his own play "Schweizer Schönheit" at the Schauspielhaus in Zurich.

Levy returned to the big screen with the comedy "Die Welt der Wunderlichs" which premiered at the 2016 Munich Film Festival.

For the Swiss "Tatort" team from Lucerne, Levy directed the experimental episode "Die Musik stirbt zuletzt" (2018), which takes place in real time and was shot without editing in a single take. Afterwards, he belonged to the twelve directors of the episode film "Berlin, I Love You" (DE/GB 2019).

With "Die Känguru-Chroniken", based on the texts (and a screenplay) by Marc-Uwe Kling, Levy directed a feature-length film again. The comedy about an artist from Kreuzberg and a talking, communist kangaroo, who take up the fight against a nationalistic Berlin real estate shark, is scheduled to be released in cinemas at the end of 2019.