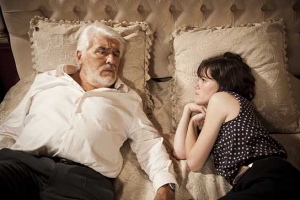 The Rhino And The Dragonfly

At a book reading Ada Hänselmann meets the acting legend Nino Winter. Ada (32) is presenting her debut novel, but the majority of the audience is only interested in Nino (82) and his autobiography "I Came, I Saw and I Loved". The ageing star and his allures irritate Ada, particularly the condescending way he speaks to her after "his" successful reading. Then Nino's flight is cancelled and Ada has to come to terms with bad news: her boyfriend breaks up with her on the phone. They meet that evening at the hotel bar. Despite their initial reluctance, a lively and inquisitive discussion develops. Ada is captivated by Nino's charm and personality. Nino is overwhelmed by the young woman's straightforward manner. During the course of the night he opens up to find new sides to himself.

Neither of them feels like sleeping, so they tell stories and play little games, in order to find out as much as possible about each other. They lie beside each other on the hotel bed, each with five questions that the other must answer honestly. But what starts out as five develops into hundreds of questions, big and small, incidental and existential, about life, love, fame and the fleeting nature of time. There is speculation and fantasy. Under the cover of night and safe in the anonymity of a stranger's bed, two worlds of thought, two generations collide and we see that sometimes the differences between two people can be the most fascinating thing of all. "The Rhino And The Dragonfly" is an honest exchange about men and women and the things that often remain unspoken in a relationship.