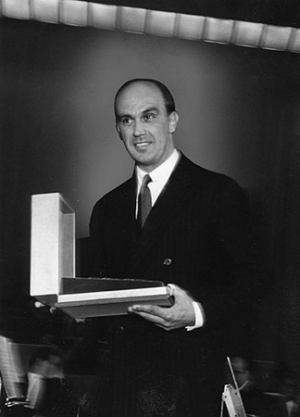 Hans Georg Karl Philipp Tressler, born on 25 January 1917 in Vienna is the son of the Burgtheater actor, director and court councillor Otto Tressler. He grew up in Vienna and made his acting debut in 1935 alongside his father with a support role in Walter Reisch's comedy "Episode". After finishing school he moved to Berlin in 1938 where started working as a director's trainee with Géza von Bolváry and Arthur Maria Rabenalt. In addition, he worked as a caricaturist for various newspapers, for which he created satirical drawings for theater and film premieres, opera and concert performances, and occasionally also for political topics. In 1940 Tressler was drafted into the Wehrmacht and did his military service in Poland and the Soviet Union; due to jaundice he was finally granted leave and was able to return to Vienna prematurely.

After the end of the war Tressler entered the film business again: Through an intermediary of Arthur Maria Rabenalt he got his first contract as a director of the short movie "Urlaub im Schnee" in 1947. In the following years appeared as an actor in several movies. Between 1949 and 1955, he directed more than a dozen short fiction films, educational films as well as short documentaries, most of them commissioned by state institutions, Austrian ministries and the Federation of Trade Unions. From 1950 to 1952, Tressler also worked as a film officer for the American ECA Mission and made so-called Marshall Plan films.

Since he was unable to win over producers in Austria for a feature-length film, Tressler went to Germany in 1956, where he was more successful: In West Berlin he shot the feature film "Die Halbstarken" ("The Hooligans") for the producer Wenzel Lüdecke in collaboration with the author Will Tremper. The milieu study about a rebellious youth clique caused a great stir, earned Tressler a Federal Film Prize as Best Young Director and has long been considered a classic. Leading actor Horst Buchholz became famous overnight for his portrayal of the main character, a gang leader. His two other films with Horst Buchholz in the leading role were also great successes: the dramatic love story "Endstation Liebe" ("Two Worlds", 1958), which won the German Film Critics' Prize, and the socio-critical adventure film "Das Totenschiff" ("Ship of the Dead", 1959).

In 1958, Tressler also directed Liechtenstein's first feature film production at original locations in Vaduz and the surrounding area: the tragicomic peasant story "Ein wunderbarer Sommer" starring Maximilian Schell and Barbara Rütting. In Austria he realised the social drama "Geständnis einer Sechzehnjährigen" (1960). When the Walt Disney Studios tried to produce film biographies in Europe in the early 1960s, Tressler shot the two-part film "The Magnificent Rebel", about the life of Ludwig van Beethoven, for the series "Disney Land" in 1962. However, the film was not well received by critics or the public.

With this failure the hoped-for international career ended even before it had really begun. At the same time Tressler's career in Germany came to a standstill because of the worsening cinema crisis. The opera adaptation "Die lustigen Weiber von Windsor" (AT 1964) and the peasant triangle story "Der Weibsteufel" ("A Devil of a Woman, AT 1966) were the last two big screen films directed by him for the next 20 years.

He also directed TV films such as the youth drama "Ausgerissen! Was nun?" (1978) and made a series of entertainment films with Inge Meysel for the Christmas programmes of the public broadcasting companies ARD and ZDF, of which the "Mrs. Harris" series ("Freund mit Rolls Royce", 1984; "Ada Harris ins Parliament", 1984) was particularly popular. In 1989, Tressler was able to realize one last feature film: "Sukkubus – Den Teufel im Leib", a mixture of mystery, horror and sexploitation film based on a Swiss myth.

In the 1990s Georg Tressler directed individual episodes of various TV series such as "Marienhof" and "Verliebt, verlobt, verheiratet". His last directorial works were two TV specials with Helmut Fischer in 1996 ("Schöne G'schichten mit Helmut Fischer"). Two years later he received the Golden Order of Merit of the City of Vienna.

Georg Tressler was married from 1961 to 1992 to the actress Gudrun Krüger, whom he met during the shooting of "Die Halbstarken" and who starred in some of his films. Their daughter Melanie Tressler became also well-known as an actress.

On January 6, 2007 Georg Tressler died in Belgern in the district of Torgau as a result of a stroke.