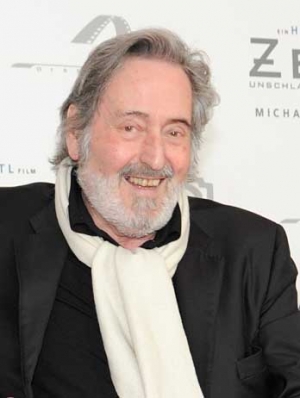 After graduating from school, Helmut Dietl - who spend his childhood in Munich – served his military time as a paratrooper. Later, he studied dramatics and art history but never completed his degree. Afterwards, he worked as a production manager and became assistant director at the Munich Kammerspiele. Furthermore, he shot commercials, wrote screenplays for television series and achieved his first success as a director.

In 1975, he directed the TV series "Münchner Geschichten", starring Therese Giehse in her last role, followed by "Der ganz normale Wahnsinn" in 1978/79. Both productions introduced the main characteristics of his later works - astute satires that are almost invariably set in Munich and that sometimes succumb to the superficial appeal of their larger-than-life protagonists.

Dietl also obtained public and critical recognition with his feature film "Schtonk!" (1991/92), a satire exploring the affair of the bogus Adolf Hitler diaries. By means of an outstanding ensemble of actors as well as a clever screenplay, Dietl succeeded in exposing the vain media circus and Germany’s obsession with its Nazi past as narcissistic maladjustment of the establishment. His movie "Rossini oder die mörderische Frage, wer mit wem schlief" ("Rossini", 1996), which gives an insider's look into Munich's film scene, turned out to be another success at the box office. Critics, however, found fault with the lack of distance between the director and writer Dietl and his subject matter.

Dietl's third film "Late Show" (1998), produced by his own company, featured Harald Schmidt and Thomas Gottschalk in the leading roles. "Vom Suchen und Finden der Liebe" (2004, screenplay by Patrick Süskind) is a somewhat flat retelling of the story of Orpheus and Eurydike. The TV documentary "Ein Mann für jedes Alter" is an homage to Mario Adorf on occasion of his 70th birthday.

The beginning of 2012 saw the release of Dietl's next movie for the big screen: The satire "Zettl", a sort of sequel to "Kir Royal" but lacking Franz Xaver Kroetz, takes on Berlin's political in-crowd. The titular role of an artful arriviste was played by Michael Herbig.