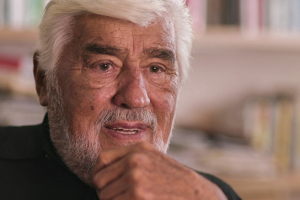 It Could Have Been Worse – Mario Adorf

He almost failed the audition for drama school in Munich, but one teacher recognised his talent: "He possesses two things: strength and naivety. Let's give it a try!" And so began the career of Mario Adorf, born in 1930, who became one of the most popular actors of his generation. This film charts the important stages in his life: his childhood in the small town of Mayen in the Eifel mountains where he grew up with his single mother; his first theatre experiences in Munich; and his first successful film role, in Robert Siodmak's "Nachts, wenn der Teufel kam" ("The Devil Strikes At Night"). The cities of Rome and Paris were constants in this European film star's biography. He collaborated with Rainer Werner Fassbinder and Helmut Dietl, but kept his distance from both the international jet set and Munich's glitterati. Adorf was often cast as the villain. At an advanced age in 2018, he played Karl Marx in the TV docudrama "Der deutsche Prophet". He is currently preparing for a farewell tour entitled "Zugabe" ("Encore") which will include songs and poems.

A film about a passionate man and actor who shares his view of the world, his profession, love and growing old in a congenial and self-ironic way.