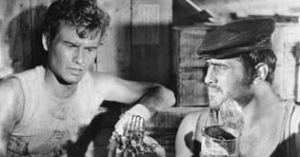 Ship of the Dead

American sailor Philip Gale is out of luck: First, he misses his boat because he spent to much time in bed with a Belgian beauty. Then he has to realize that the same woman took his money and passport. When he is interrogated by the Belgian police, he can′t identify himself and is deported to the Netherlands. There he hopes for the help of the American consulate, but is told that he would have to wait considerable time for a new passport. Anxious to leave, Philip illegally crosses the French boarder. Looking for a cruise back to the States, he signs on the "Yorikke". But once on board, he has to realize that the "Yorikke" is in fact a coffin ship: Overinsured by its ruthless owners, it is meant to sink. The cruise becomes a matter of life or death, but Philip refuses to give up: Together with stoker Lawski, he comes up with a plan.