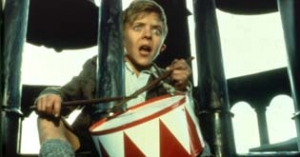 Gdansk, 1924. For the Matzerath family, a new child is born. From the moment of his birth, little Oscar is a rather precocious and perceptive lad. Already as a little baby within the arms of his mother, he begins to observe the world around him with skepticism. When he is three years old he gets a tin drum for his birthday. And on that very same day, arising from a deep-seated sense of denial, he decides to stop growing.

While both mentally and physically he continues to develop as a man, his bodily appearance automatically creates a distance between little Oscar and the "adult" world. Through his loud drumming and his ability to shatter glass with his voice, he articulates his protest against the deceitful and scheming world of adults. In a world where the young man Oscar is seen as a simple-minded child, he has equally both the touch of genius and of something diabolical. He drives both his presumed fathers to death as well as making a career as an artist, performing for Nazi troops on the front while still remaining scornful and distant. Only with the end of the Second World War does he decide to grow again and thereby have a say in the future.