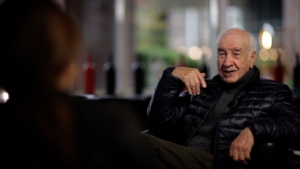 In 1946, aged 28, Artur Brauner started producing films in the completely destroyed Berlin. He wanted to narrate the suffering that the Nazi regime had wrought on Europe’s Jews and became Germany’s most successful producer. His company, CCC Filmkunst, brought both big screen entertainment and socially critical chamber pieces to the screen. Brauner also brought America’s most renowned directors back to Germany; Robert Siodmak, William Dieterle, Fritz Lang and Gerd Oswald, all of whom had been forced to emigrate. He filmed Mabuse, Karl May and Edgar Wallace crime stories. He also constantly returned to the theme of his life, the Holocaust. Here, outstanding personalities of the film industry pay tribute to Brauner’s work and incomparable story.