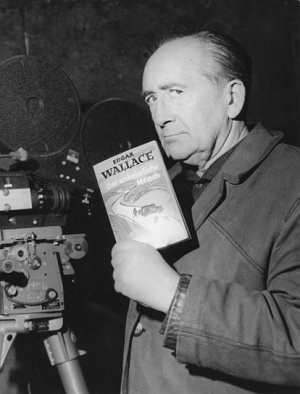 Harald Reinl was born July 9, 1908, in Bad Ischl as the son of the engineer Hans Reinl and his wife Ida, born Schedl. He attended school in Hall, and studied law in Innsbruck after finishing school like his younger twin brother Kurt who later worked as an attorney. During his studies he also dedicated himself to ski racing and become the Academic ski world champion in 1931.

Director Arnold Fanck discovered him during a ski race and engaged him for his mountain films. Reinl appeared as a ski racer in "Stürme über dem Mont Blanc" ("Avalanche") and also served as a body double for Leni Riefenstahl, in "Der weiße Rausch" ("Ski Chase"), as well as in "Abenteuer im Engadin" ("Slalom") that was based on an original idea by Fanck and was directed by Max Obal. Reinl also worked as a third assistant director for Obal. He then did his doctorate in law but did not finish his practical training as articled clerk. During the 1930s, he worked as a skiing teacher and operated a skiing school in France together with friends from university. In 1936, he won the second place behind Sepp Brandl with a jump of 98 metres at the ski jump in Planica.

Together with Guzzi Lantschner, who also participated in Fanck’s films, Reinl wrote the screenplay, edited, and directed the short documentary feature films "Oster-Skitour in Tirol" and "Wildwasser". From 1940 on, Reinl worked as Leni Riefenstahl’s assistant director and participated in the screen play and editing of "Tiefland" ("Lowlands"). The shooting of the film took until 1944. The screenplay to "Die roten Teufel" that Reinl finished with Leni Riefenstahl and Joachim Bartsch was probably also written during that time. However, the film was never realized. During the first post-war years, Reinl kept afloat with the production of house shoes.

In 1955, Reinl caused a stir with "Solange du lebst" ("As Long As You Live"), a heroic drama about the Spanish Civil War: While Freiwillige Selbstkontrolle thought that the original version was too militaristic, Filmbewertungsstelle reviewed the recut version of the film as "valuable". In 1958, Reinl finished two more war films: "Die grünen Teufel von Monte Cassino" and "U 47 – Kapitänleutnant Prien" ("U-47 Lt. Commander Prien").

Between the two adventure movies "Romarei, das Mädchen mit den grünen Augen" and "Paradies der Matrosen", Reinl laid the foundation to the series of Edgar Wallace films with the Danish production "Frøen" ("Face of the Frog"). This film series became one of the most successful and longest-running West German film series. Reinl directed four more films of the series, "Die Bande des Schreckens" ("Hand of the Gallows"), "Der Fälscher von London" ("The Forger of London"), "Zimmer 13" ("Room 13"), and "Der unheimliche Mönch" ("The Sinister Monk"). Furthermore, he finished "Der Würger von Schloß Blackmoor" ("The Strangler of Blackmoor Castle") based on Bryan Edgar Wallace (one of Edgar Wallace’s sons) as well as "Der Teppich des Grauens" ("The Carpet of Horror") and "Die weiße Spinne" ("The White Spider"), both based on novels by Louis Weinert-Wilton.

In between times, he also finished pop music films like "Wir wollen niemals auseinandergehn" ("We Will Never Part") and several action film versions of literary sources, including "Der letzte Mohikaner" ("The Last Tomahawk") based on James Fenimore Cooper, the two-part film "Nibelungen", or "Die Schlangengrube und das Pendel" ("Blood of the Virgins") based on Edgar Allan Poe.

Reinl was also in charge of directing the action scenes of Wolfgang Liebeneiner’s adaptation of Goethe’s play "Götz von Berlichingen mit der eisernen Hand" ("Iron Hand"). He finally ended his career in the film business with the adventure film and slapstick comedy "Im Dschungel ist der Teufel los" ("Crazy Jungle Adventure"). With his sense of action and romance, Reinl was the commercially most successful craftsman and experienced director of German post-war genre films. However, as the director he earned far less from his movies than the distributor, producers, and movie theatre owners.

Harald Reinl was married from about 1946 to 1950 to Corinna Frank and from 1954 to 1958 to actress Karin Dor (real name: Kätherose Derr) whom he had met while shooting her first film "Rosen-Resli" in Wiesbaden. Their son Andreas was born in 1955. Since the mid-1970s, had been lived a reclusive life with his third wife, the former Czech actress Daniela Maria Delis, on the outskirts of Puerto de la Cruz on Teneriffa where Harald Reinl was fatally stabbed from behind by his wife on October 9, 1986.