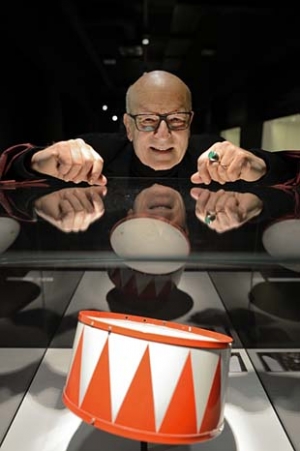 In front of the show case with his "Blechtrommel" in the Deutsches Filmmuseum Frankfurt am Main on March 28, 2013

Volker Schlöndorff was born in Wiesbaden on March 31st 1939. While still in school, he participated in a student exchange programme with France in 1956 – and instead of the planned two months, he stayed for ten years: In 1959, he graduated with the baccalauréat from his school in Paris (with director Bertrand Tavernier being one of his classmates). After also receiving his German school diploma in Frankfurt, he returned to Paris where he obtained a university degree in political science. Subsequently, Schlöndorff enrolled at the Institut des Hautes Etudes Cinematographiques (IDHEC) in Paris. There he made acquaintance of Louis Malle, with whom he would collaborate on several occasions in the following years.

In 1960, Schlöndorff shot the short "Wen kümmert's" about Algerians living in Frankfurt. The film did not get a certification from the FSK, the German board of film classification, due to its alleged "biased stance against a friendly nation" (e.g. France).In the winter of 1960, he assisted director Ludwig Berger at the Sender Freies Berlin network; and together with Louis Malle, he worked on features about Southeast-Asia and Algeria for French television.

Around the same time, Schlöndorff began to works as an intern and assistant director on productions by emerging and already famous French directors like Malle, Jean-Pierre Melville and Alain Resnais. In 1964, he received a grant of 20.000 Deutsche Mark for his first screenplay "Der junge Törless", an adaptation of Robert Musil's novel "Die Verwirrungen des Zöglings Törleß". After assisting Louis Malle during the shoot of "Viva Maria" in Mexico, he began production on "Der junge Törless" ("Young Törless") in the winter of 1965. The film turned out to be a critical success, garnering three German Film Prizes (for Best Film, Best Direction and Best Screenplay), and is today considered to be the first international hit of the New German Cinema. He shot his second feature film "Mord und Totschlag" ("Degree of Murder", 1967) in colour, which was unusual for a young director, and followed that with the international co-production "Michael Kohlhaas – Der Rebell" ("Michael Kohlhaas - The Rebel", 1968). From 1969 on, Schlöndorff worked closely with Margarethe von Trotta, who started out as an actress and then became his assistant director, co-author and co-director. The two married in 1971.

In 1969, Schlöndorff and fellow filmmaker Peter Fleischmann founded the production company Hallelujah-Film in Munich. And in 1974, he and Reinhard Hauff became majority shareholders in the Bioskop-Film, which to this day is managed by Eberhard Junkersdorf and handles all his productions. From early on, Schlöndorff became actively involved in cultural politics: He participated in the debates surrounding the public funding of film productions and between 1974 and 1978, he was on the German Federal Film Board as a representative of the Social Democratic Party .

In between his films, Schlöndorff frequently ventured into the world of the opera. He directed the 1974 staging of "Katja Kabanova" in Frankfurt, the 1976 Berlin production of "Wir erreichen den Fluß", and in the same year – together with Mathieu Carrière – "Zoopalast" in Montepulciano. In 1981, again in Montepulciano, he staged Purcell's "Didon et Enée", and in 1984, he directed the production of Puccini's "La Bohême" in Frankfurt.

Schlöndorff's final commercial breakthrough came in 1975 with the adaptation of Heinrich Böll's "Die verlorene Ehre der Katharina Blum" ("The Lost Honor of Katharina Blum"), which he co-directed with Margarethe von Trotta (who went on to make her own films). Because of the film, which questions the role of tabloid press and police in the fight against left-wing extremism and alleged Red Army Fraction (RAF) terrorists, and because of his own support for a legal defense fund for political prisoners, Schlöndorff was subsequently heavily criticized by right-wing pundits and the conservative party. In 1978, he was one of the initiators and – with Alexander Kluge – producers of the compilation film "Deutschland im Herbst" ("Germany in Autumn"), which dealt with the impact of RAF terrorism on German society. "Der Kandidat" ("The Candidate") und" Krieg und Frieden" ("War and Peace") –1980 and 1982 respectively – were another two collaborative semi-documentary works, which tried to counter the televised perspective on political issues.

That time also saw his biggest commercial and critical success to date: The elaborate adaptation of Günter Grass' novel "Die Blechtrommel" ("The Tin Drum") won the Golden Palm at the 1979 Cannes International Film Festival (ex aequo with Coppola's "Apocalypse Now") and also received the Academy Award for Best Foreign Language Film in February 1980. This, plus the many more prizes bestowed on "Die Blechtrommel", was perceived as an important sign of New German Cinema's international recognition.

After "Die Fälschung" ("Circle of Deceit", 1981), which was mainly filmed on location in Beirut, Schlöndorff directed an international all-star cast (including Jeremy Irons, Ornella Muti, Alain Delon and Fanny Ardant) in the lavish French-German co-production "Eine Liebe von Swann" ("Swann in Love"), an adaptation of one of the chapters from Marcel Proust's novel "A la recherche du temps perdu".

In 1985, Schlöndorff helmed the film adaptation of Arthur Miller's "Death of a Salesman" starring Dustin Hoffman. "Ein Aufstand alter Männer" ("A Gathering of Old Men"), "Die Geschichte der Dienerin" ("The Handmaid's Tale", 1990) and the award-winning "Homo Faber" ("The Voyager", 1991) were also German-American co-productions and featured prominent actors. In 1991, his marriage to Margarethe von Trotta was dissolved; in 1992, he worked with film critic Hellmuth Karasek on "Billy, How Did You Do It?", a six-part TV series on legendary director Billy Wilder.

"Der Unhold" ("The Ogre"), starring John Malkovich, premiered at the 1996 Venice International Film Festival to mixed reviews and did not fulfil the box office expectations. Shot in the US, the neo-noir "Palmetto" (1997) featuring Woody Harrelson and Elisabeth Shue also did not live up to its potential. Success and critical acclaim returned with "Die Stille nach dem Schuss" ("The Legends of Rita"), a gripping drama about West-German left-wing terrorists who found refuge in the German Democratic Republic of the 1970s. The film was in the competition of the 2000 Berlin International Film Festival, and garnered lead actresses Bibiana Beglau and Nadja Uhl a Silver Bear. Equally successful was the multi-award winning "Der Neunte Tag" ("The Ninth Day", 2004), an intense drama about the Holocaust, starring Ulrich Matthes and August Diehl.

"Strajk – Die Heldin von Danzig" ("Strike", 2006), was a dramatisation of the real-life struggle of Anna Walentynowicz, who was one of the founders of the Polish workers movement Solidarnosc. This was followed by "Ulzhan – Das vergessene Licht" (2007), a poetic drama set in the prairie of Kazakhstan which dealt with the peculiar relationship between a nomad woman and a life-weary European.

With Peter Greenaway and other filmmakers, Schlöndorff contributed to the 2010 release "Michael Nyman in Progress", a film portrait of the eponymous composer and musician. Two years later, the WWII drama "Das Meer am Morgen" ("Calm at Sea"), written and directed by Schlöndorff, premiered at the Berlin IFF. His next film also screened in Berlin and again, the story – based on the stage play by Cyril Gély – was also set in WWII: "Diplomatie" ("Diplomacy", 2014) depicts a (fictitious) argument between the Swedish consul general and the German army commander of Paris in the year 1944, just as Hitler has ordered the total destruction of the city.