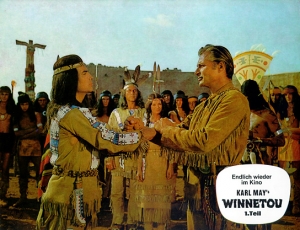 In the first part of the immensely succesful "Winnetou" trilogy directed by Harald Reinl, an inexperienced railroad employee nicknamed "Greenhorn" becomes courageous westerner Old Shatterhand. Because of the intrigues of villain Santer, who unlawfully takes hold of the land of the Apaches, Shatterhand almost becomes an enemy of apache chief Intschu-tschuna and his son Winnetou. But after saving Winnetous life and proving himself in a fight with Intschu-tschuna he becomes the blood brother of Winnetou, and beyond that his sister Nscho-tschi takes a shine to the "white man". But Santer is already plotting new mischief.